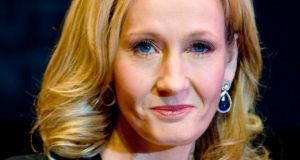 An international charity founded by Harry Potter creator JK Rowling is teaming up with NUI Galway on a project aimed at ending institutionalised care of children.

Lumos, named after Harry Potter’s light-giving spell, has commissioned the Unesco Child and Family Research Centre at NUI Galway to conduct research into understanding why 80 per cent of children in orphanages have living parents, and how families can be reunited.

Atlantic Philanthropies is to grant-aid the initiative,valued at between €7 million and €9 million, which aims to find practical and sustainable ways to support families and children in different regions of the world.

Lumos chief executive Georgette Mulheir, whose parents are from Roscommon, said an estimated eight million children lived in institutions and so-called orphanages, and were deprived of the stimulation and engagement that was required for their physical, intellectual and emotional development.

The orphanages were so called because it was believed 80 per cent of the children had parents who were forced by socio-economic circumstances to surrender their children to institutions.

“I looked at that photograph of the boy in his cage bed and felt he has absolutely no voice,” the award-winning author, who has funded a number of charities, has said.

“This touched me as nothing else has because I can think of nobody more powerless than a child, perhaps with a mental or a physical disability, locked away from their family,” she explained.

Three years later, Rowling raised almost £2 million for the charity when she auctioned a special edition of The Tales of Beedle the Bard and the book was widely published in aid of the charity in December 2008.

Ms Mulheir, who was named last year as one of the world’s most influential social workers, has worked closely with Rowling, who is now Lumos’s life president.

Ms Mulheir began her career in Sheffield where she was assigned to support teenage mothers to stay with their babies. She has had experience of institutionalised care of children in some 20 countries, including the orphanages of post-Ceaucescu Romania, and was attached to the University of Limerick’s Centre for Peace and Development Studies in the late 1990s.

Ms Mulheir said that she had recently returned from Haiti which was hit by a magnitude 7.0 earthquake in January, 2010.

“There has been an explosion in institutions there, caring for some 32,000 children,”she said.

“In that sort of situation, well-meaning relief organisations rush in to provide short-term shelter to children who have become separated from or have lost their parents,”she said.

Such shelter can gain a permanency as time moves on, and as parents, who may have lost everything, come to believe that this is the only way their children can gain access to health and education or care for a disability, she explained.