GPO women in chains proclaim ‘ownership of own bodies’ 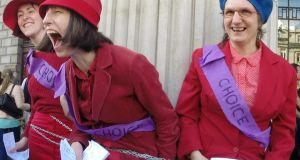 Members of the Speaking of Imelda performance group chained themselves to the columns of the General Post Office in Dublin for two hours on Monday as they made an unofficial contribution to celebrations of the Easter Rising of 1916.

Members of Speaking of Imelda, a direct-action feminist performance group that operates from England, chained themselves to the columns outside the General Post Office in Dublin for two hours on Monday as they made an unofficial contribution to celebrations of the Easter Rising of 1916.

Dressed in red, the women, who operate as a collective and refuse to be named individually, read out their alternative proclamation for Ireland 99 years after Patrick Pearse marked the beginning of the Easter Rising by reading out the original Proclamation, also outside the GPO.

The “proclamation” from Speak of Imelda read:

And all who live in Ireland

In the name of citizenship

Promised to us on these steps

And to control their own destinies”

The group, which had travelled over from London to be present at RTÉ’s Road to the Rising event, also called for repeal of the Eighth Amendment to the Constitution.

The majority of Speak of Imelda’s members were born in Ireland, a spokeswoman said. Some have been living in the UK for decades, others for only a year. They also draw support from people of Irish descent.

“I know that it’s a terrible thing to say, but being outside the country has given me a different perspective on being a woman,” said a member of the group. “We see all these tragedies happening, and you are away from home and you feel helpless.

“As Irish citizens we are special. Lots of people emigrate largely because they can’t find work. They go abroad to live in more liberal societies and forget about Ireland.

“But we refuse to go away and be quiet. We are no longer silent. We can no longer be quiet women,” she said.

While Irish politics tends to get little international attention, the group plans to “shine the light on this country and on the issue of reproductive rights.

“Every time an Irish politician comes to England, we will be there and raise this.”

The group had been true to their “punk, direct action, public performance origins” since they came together in 2013.

Most notably, they made a presentation of a pair of large women’s knickers complete with “Repeal the Eighth” slogan to Taoiseach Enda Kenny during a political fundraising dinner in London in October 2014.

Speak of Imelda, which favours both large pants and large social media incursions, dress in red because women from the Irish Women’s Abortion Support Group would wear a red skirt so women travelling to meet them to have an abortion in England would recognise them at airports or stations.

The name Imelda was employed as a codename by women travelling to England for abortions between 1986 and 1995.

“I would come back to live here, but I have a nine-year-old daughter - and I will not bring her to live in a place where she does not have bodily autonomy,” said one member of the group.

According to British Department of Heath figures for 2014, up to 10 women are thought to leave the Irish State every day to get an abortion in the UK.