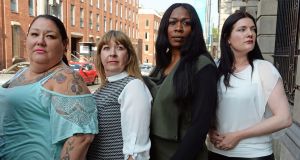 Bridget Perrier, Fiona Broadfoot, Ne’cole Daniels and Rachel Moran, who gave testimonies about having survived prostitution, at the launch of the Turn Off The Red Light campaign at Leinster House on Wednesday. Photograph: Eric Luke

Women formerly involved in the sex industry have spoken of their experience of abuse, extreme violence and rape to lend their voices to a campaign for legislation criminalising the purchase of sex.

The Turn Off The Red Light coalition of more than 70 organisations wants to see the Criminal Justice (Sexual Offences) Bill 2015 passed by the Dáil in the current term.

It contains measures to criminalise the purchase of sex, along the lines of the approach taken in Sweden and other Nordic countries.

The Bill completed passage through the Seanad in January and is now at second stage in Dáil Éireann.

Speaking in Dublin on Wednesday, Denise Charlton of the coalition said the legislation would tackle demand by penalising the buyer and would protect those in the sex industry by decriminalising their position.

She said the Bill had enjoyed cross-party support and urged Oireachtas members present, including chairman of the Joint Oireachtas Committee on Justice and Equality Caoimhgín Ó Caoláin of Sinn Féin, Labour Senator Ivana Bacik and Green Party TD Eamon Ryan, to assist with its progress.

Turn Off The Red Light estimates that on any given day, between 800 and 1,000 women, men and children in Ireland are advertised online for sex. It says that between 87 per cent and 98 per cent of them are migrant women and many are from impoverished backgrounds.

“The trade in Ireland is run by criminal gangs, who earn €250 million annually from those they exploit,” the campaign said.

Ms Charlton also claimed business was coming across the Border since a law criminalising the purchase of sex was introduced in Northern Ireland last year.

“Why wouldn’t you go a couple of miles down the road as a buyer or a pimp where you’re not going to be penalised?”

Critics of the approach taken by the Bill say it will not eliminate the sex industry, but will push it further underground, and could further endanger an already vulnerable group.

The campaign was launched in conjunction with Space International, an international organisation for women who have survived prostitution.

Women who spoke at the event included Bridget Perrier from Canada, co-founder of survivor group Sextrade101; Rachel Moran, who has campaigned for the Nordic model in Ireland; Fiona Broadfoot from Leeds, who was forced into prostitution aged 15; and Ne’cole Daniels from San Francisco who said she spent nine years trapped in the sex trade after she was pimped by members of her family.

Mr Ó Caoláin said he was hopeful the Bill would be enacted at the earliest opportunity.

The Department of Justice said: “It was evident from the debates in Seanad Éireann, and to the extent that the Bill was considered in Dáil Éireann, that the Bill received wide cross-party support. Tánaiste and Minister for Justice Frances Fitzgerald considers it the highest legislative priority for the new Dáil term.”

The Sex Workers Alliance Ireland said it was "deeply concerned" about the legislation.

It said the Bill was drafted four years ago. Since then, new international evidence, including a large-scale report by Amnesty International, had shown that  the type of law detailed in Part IV of the Bill had “harmful and even fatal consequences for the very people it is designed to protect – sex workers”.

“It is now clear that this is a counterproductive and dangerous piece of legislation,” the organisation said.

It said it was also deeply concerned about the two amendments included in Part IV of the Bill which would further criminalise (by doubling fines and doubling custodial sentences) the vast majority of sex workers in Ireland, i.e. those who work together for safety, and those who work on the streets.

“In short, Part IV of this Bill makes sex workers’ lives more dangerous, further marginalises an already vulnerable group of people, and worst of all, increases punishments for sex workers trying to work safely. We urge the Government to remove Part IV and instead conduct research into the experiences and needs of sex workers in Ireland.”

SWAI welcomed other measures in the Bill, such as those on  child protection, consent, and the rights of people with disabilities. It said these were important and long-awaited pieces of legislation, and should be passed immediately without the “harmful and regressive criminalisation contained in Part IV”.