Protective certificate granted to family with over €600,000 in borrowings 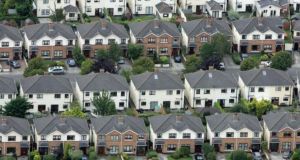 The borrowers have unsecured debt, a mortgage and a buy-to-let property.

The first protective certificate for a personal insolvency case involving mortgage debt has been issued by the courts..

It emerged today that the case involved a family with over €600,000 in secured and unsecured borrowings who live in the Leinster area. The borrowers have unsecured debt, a mortgage and a buy-to-let property.

It is understood that the certificate was issued at Trim Circuit Court last week.

The certificate gives the family 70 days to negotiate and make arrangements with creditors which will then be voted on and implemented.

The personal insolvency practitioner (PIP) involved in the case is Mitchell O’Brien who is based in Dungarvan.

Mr O’Brien said PIPs are “independent” and have to “plot a very even route between creditors and debtors”.

While the outcome of this case would “set a precedent” as the system was new to the court service, debtors and creditors, he said every case would be “decided on by its own merit” .

After a protective certificate is issued, creditors are asked to make submissions on how their debt will be treated and provide proof of debt within a defined period. On the pack of that the PIP will put forward a proposal, he said.

He described by insolvency system as “a little bit cumbersome”. However, everyone will become “more comfortable with intricacies” as it continues and it will “become more streamlined”, he said.

Asked about the volume of such cases expected, Mr O’Brien said his “small practice” has another 23 cases that are going to apply for a protective certificate of debt settlement and another 140 that are at various stages of preparation.

Earlier this week a Co Donegal civil servant in his 40s became the first person in the country to have a debt settlement arrangement agreed by his creditors.

Three of the country’s major banks were involved in the arrangement, provided for by new legislation, along with three other creditors. They voted by a sufficient majority, though not unanimously, to accept the settlement proposed.

Yesterday, a firm operating as a PIP said that one in four people entering insolvency negotiations with creditors have voluntary surrendered their homes.

Grant Thornton Debt Solutions said before it submitted clients’ paperwork to the Insolvency Service of Ireland it engaged in pre-negotiations with creditors. In 80 per cent of cases it received approval in principle from stakeholders to do a deal.

As part of a personal insolvency arrangement, 25 per cent of the 20 cases dealt with so far opted for voluntary surrender of property. This effective returning of the keys to their properties to the bank, allowed debtors to leave behind unsustainable mortgages, GT Debt Solutions said.