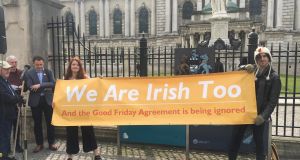 Two hundred people gathered outside Belfast City Hall on Saturday for a We Are Irish Too rally organised by immigration and citizens’ rights campaigner Emma DeSouza.

Ms DeSouza, a 31-year-old coffee shop manager and Open University student currently going through a court battle to be accepted as an Irish-only citizen from Northern Ireland, wants to exercise a European Union provision under freedom-of-movement law to bring her US-born husband, Jake, to live with her.

The UK Home Office would require her to go through its complex procedure for approving third-country family reunions, or to use her Irish citizenship by renouncing her British citizenship, which she says does not apply to her in the first place.

Ms DeSouza told The Irish Times the importance of the We Are Irish Too movement is the need to have full implementation of the Belfast Agreement.

“It’s been 21 years since it was signed and so many parts of that have not been put into UK domestic law,” she said.

“Up until now we have had the blanket of EU law taking care of us.

“It is going to leave us especially vulnerable so today is a stand for the Good Friday Agreement, a stand for peace, and our right to be Irish or British or both if we choose.”

“We keep hearing this assurance that our EU rights will be protected in any Brexit scenario but I am an example of an Irish EU citizen who already doesn’t have their EU rights, because I can’t access my right to family reunification,” she said.

“My rights are already being denied and I am not the only one.”

Ms DeSouza rejects the suggestion from critics that she is affiliated with one particular political party, saying she works with all parties in the North.

“He recently was quoted as saying the idea the British Home Office is advising people to renounce British citizenship is perverse, and it’s very clear that right to be Irish or British or both is there, in writing, in an international treaty and that needs to be upheld.”

Alliance Party deputy leader Stephen Farry was among the crowd in Belfast to offer support to Ms DeSouza and others in her position.

“Clearly everyone made the Good Friday Agreement in good faith in 1998 but there are clear commitments that haven’t been turned into legal effect so there is a duty in particular on the UK government to address particular anomalies that exist,” he said.

“Two key things we have raised with the government is they have to reform the Nationality Act 1981 and reflect the whole breadth of identifies here, and secondly we need to put the Common Travel Area across these islands on a more formal footing, so that is a challenge for both the UK and the Irish government.”

Mr Adams said: “It is really important that the Good Friday Agreement is upheld both in the spirit and the letter. This government in London is clearly in breach of it and the Irish Government has to stand up to them.”

A minute of silence was held at the rally for murdered journalist, author and LGBT+ rights activist Lyra McKee.