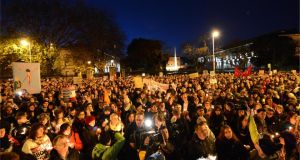 Thousands gather to demand legislation on abortion after the death of Savita Halappanavar at Merrion Square, Dublin at the weekend in 2012. Photographer: Dara MacDónaill/The Irish Times

The report, “She Is Not A Criminal: The impact of Ireland’s abortion law”, says despite the enactment of the Protection of Life During Pregnancy Act (PLDPA) last year, Ireland is not complying with its international human rights obligations, and that the rights of women and girls here to life, health, equality, non-discrimination, privacy, information, and, freedom from torture and other degrading treatment are all being violated.

“In particular, the privileged position that the Irish Constitution’s Eighth Amendment accords to the foetus comes at the unacceptable expense of the rights and lives of pregnant woman and girls,” the report says.

“This constitutional provision is inconsistent with international human rights law, which does not recognise a foetal right to life and is clear that human rights apply after birth.”

The Eighth Amendment inserted Article 40.3.3 into the Constitution in 1983.

It guarantees to vindicate, as far as practicable, the equal right to life of the unborn and the pregnant woman.

The report, part of Amnesty International’s global campaign, “My Body, My Rights”, is based on research here and in England conducted between September 2014 and April 2015.

Amnesty staff interviewed 26 women, six of their partners and the mother of a teenage girl, about the abortion regime. Also interviewed were 11 health care professionals, including the Masters of the National Maternity and the Rotunda hospitals - Dr Rhona Mahony and Dr Sam Coulter Smith - as well as representatives from women’s health centres and staff from the Crisis Pregnancy Agency and the Irish Medical Council.

The PLDPA and the accompanying guidelines for clinicians, leave the legal situation surrounding abortion “largely unchanged”, the report says.

The guidance documents for clinicians, from the Department of Health “offer little clarity into the circumstances in which women and girls may lawfully access an abortion, failing to define what constitutes a risk to life, as opposed to health”.

It says doctors must still wait until an ill woman deteriorates to the point where her life is at risk before intervening to terminate.

“This practise occurs at the expense of pregnant women’s lives. Savita Halappanavar was one such woman. Her death was a consequence of the Eighth Amendment and Ireland’s restrictive abortion law. If Ireland allowed abortion on health grounds...Savita Halappanavar could be alive today,” the report says.

Nor has the PLDPA eased access to abortion in the case of suicide, the report says.

It describes the “egregious case” of Ms Y, a young, apparently suicidal asylum seeker who sought an abortion but was unable to access one here or to travel for one.

Though eventually certified as suicidal under the terms of the PLDPA, she underwent a Caesarean section at about 26-weeks’ gestation in August 2014.

The report describes Ms Y’s case as one of “forced pregnancy and coerced caesarean section, in lieu of providing an abortion.”

The experiences of women diagnosed with fatal foetal abnormalities, rape survivors, migrants, asylum seekers, Travellers and poor women, who wish to have an abortion, are examined.