The city trees that pose a threat to human health 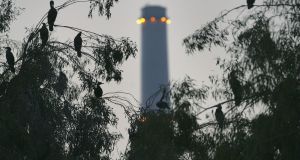 Eucalyptus trees in the Israeli city of Hadera. The pungency of eucalyptus is due to a blend of volatile organic compounds, which can cause problems when mixed with urban air plumes. Photograph: David Silverman/Getty

Trees in urban areas can be bad for air quality. Some trees can raise levels of nasty air pollutants. Whether this happens depends on the types of trees you plant, and planners should take this into account when making decisions on urban greening.

The warning comes from scientists who study the compounds emitted by trees. There is more to emissions than power plants or diesel engines: 90 per cent of volatile carbon emissions come from vegetation. Examples of volatile organic compounds, or VOCs, include the distinctive aroma of pinene in pine, limonene in citrus trees and linalool in lavender.

“There are literally thousands of these compounds that we have detected that are emitted by plants,” says atmospheric chemist John Wenger of University College Cork. The pungency of a cedar, eucalyptus or pine woodland is due to a blend of VOCs. Problems can occur when these mix with urban air plumes.

They interact with nitrogen-oxide pollutants from traffic and, in the presence of sunlight, produce ozone. This is a harmful pollutant at street level. It damages cells, injures lung function among vulnerable groups and has been linked to heart disease. Ozone is also toxic to plants.

Wenger stresses that tree emissions are not in themselves pollutants but can mingle with pollutants to create air-quality problems. We should bear this in mind when choosing tree types.

It is not that Ireland is out of line. Scientists in Germany looked at recent efforts to make large cities in Europe and the US greener. None of the greening programmes provided explicit guidelines on which plant species should be preferred or avoided from the point of view of air quality.

“There is a gap between science and policy by city planners. For instance, we looked at the New York Million Trees campaign and they had on their list some trees known to be high emitters of VOCs,” says Dr Galina Churkina at the Institute for Advanced Sustainability Studies in Potsdam, Germany.

“Certain trees emit lots of volatile organic compounds, and if that happens in a polluted environment this can lead to more problems with air pollution.”

Churkina published her research about “picking the right trees” in a policy journal to try to influence planting strategies. The US is especially conscious of ozone pollution. Cities such as LA have the bright sunlight and traffic emissions perfect for photochemical smog. Although there is no shortage of science showing that trees can play a role, it is not having an impact on policy.

He lists ash, silver birch, field maple and scots pine as among those with the greatest capacity to improve air quality.

Hawthorn, hazel, holly, mountain ash and sycamore are described as having a small capacity to improve air quality.

Hewitt came up with his categories to assist informed decision-making. “There might well be other reasons to plant these trees, but the point is to at least take air quality into account.”

Is a ban in order?

Fortunately, Ireland rarely suffers significant ozone pollution. “It would only be during summer months and requires high temperatures and low dispersion conditions: anti-cyclonic weather with low winds,” says Wenger. “We don’t often get that. Two years ago, when we ran out of paddling pools, was the last time.”

But the warnings about which trees to plant should be listened to, he says. “We should still adopt best practice, because we are still going to make some ozone and we should be doing everything we can to limit air pollutants.”

The link between heat and emission from trees is interesting. Forests smell pungent in warm weather because VOC emissions go up with rising temperature.

One of the most important VOCs is isoprene (C5H8), which appears to protect against heat stress. Stressed trees in urban areas release more emissions. And a healthy tree generates fewer emissions. FRESHLY CUT GRASS: A CHEMICAL COCKTAIL The smell of freshly cut grass might be an evocative summer smell for most of us, but not for Dr Galina Churkina. “If you walk along a busy street in summer and someone is mowing a lawn, don’t breathe in very deeply,” advises Churkina, an expert on air pollution at the Institute of Advanced Sustainability Studies in Potsdam, Germany.

The smell of cut grass is a mix of chemicals released and oxygenated as part of a wound-defence mechanism. They act as an invitation to predatory insects to come eat insects feeding on a damaged plant.

But the cocktail – “green-leaf volatiles” – can lead to the production of ozone, which is a lung irritant and pollutant.

In a recent study Churkina suggested that reducing the amount of turf grass could improve air quality in some cities, and she says cutting the grass less frequently can be good for air quality.

However, ozone formation requires sunlight, so Ireland is usually spared.

Still, scientists know little about the chemical paths followed by volatile organic compounds once they exit plants. This is not unimportant. It is thought that 500 million tons of one such compound – isoprene – is released every year by trees, and such emissions impact on air quality, cloud formation and even climate.

UCC’s atmospheric science group recently received a €1.1 million injection from Science Foundation Ireland for a new simulation chamber. The group will be able to track what happens to the carbon-containing compounds that trees release inside this chamber. Some of these break down into dozens of different molecules. Results from the UCC lab led by Dr John Wenger can feed into improved air quality and climate change models.