Pylon controversy: questions remain to be asked and answered regarding cancer risk

While studies have linked cancer risks to power lines, distance from the lines is key 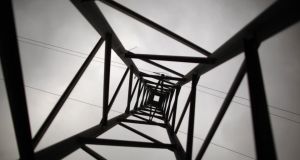 When it comes to understanding the risk of power lines, decades of study have not revealed a biological cause and effect in relation to the fields.

Many objectors to the Grid25 pylon project will have cited cancer risks as their major cause of concern. Their worry is appropriate given there is a clear association between living close to power lines and increased risk of cancer.

International study after study has shown that children living within 50 metres of the power lines (not just the pylons) have an increased risk of developing acute leukaemia.

The risk relates to the electric and magnetic fields that form automatically around power lines, but also around any wire that carries electricity. The lower the voltage in the line, the weaker the fields that form around it.

Objectors point to the 400 kilovolt (400,000 volt) transmission lines that would be built under the €3.2 billion Grid25 project but in fact, we are surrounded by overhead lines, particularly in built-up areas.

Some hang from wooden or metal electricity poles above footpaths while power lines are often fixed along terraced roof lines, presumably running along the outside of bedroom walls. All of these cables produce fields in the same way as the 400kv lines but they are much weaker.

In all cases the risk is associated with being close to the fields. This means living no closer than 50 metres and better still 100 metres from high voltage overhead lines.

The reduced risk relates to something called the inverse square law which means the field strength drops very sharply the greater the distance from the source.

It is one thing raising a concern and another thing proving that it is causing a health effect.

This is where the need for hard data comes in. Proponents and opponents of the power line expansion will have medical studies that “prove” that the power lines are either safe or dangerous no matter how far away you are.


Cause and effect
When it comes to understanding the risk of power lines, however, the bottom line is that decades of study have not revealed a biological cause and effect in relation to the fields.

“You have to live really close to these power lines for there to be any impact but even then no biological cause can be identified,” says Prof Tom Cotter, professor of biochemistry at University College Cork.

His research group has spent 20 years studying leukaemia, including acute leukaemia in children. This is the main cancer usually examined in studies related to health risk of power lines.

There is “no known mechanism” to link these fields and leukaemia, he says, adding that “just because we have no cause and effect doesn’t mean there is no effect”.

To gauge the effect on the ground a huge study is needed; one of the most recent was done in France and included all 2,779 cases of acute leukaemia that occurred there between 2002-07, plus 30,000 controls. It was published last April in the British Journal of Cancer.

It showed children had a 70 per cent increased risk of this rare condition if they lived within 50 metres of high voltage power lines of the kind causing controversy in Ireland. It also showed there was no increased risk for children living 50 metres or more from these lines.

The National Cancer Registry of Ireland looks at all kinds of cancers, scrutinising the annual statistics in the hunt for patterns and clusters. Clusters have been identified, for example higher prostate cancer rates in the Republic than in the North, or higher lung, stomach and head cancers in areas of high social deprivation.

It cannot identify whether power lines have any impact, mainly because it doesn’t have the data it needs to prove such a thing, says Dr Sandra Deady, a data analyst with the registry.


Cancer data
It collects data on an electoral district basis so any association with power lines “isn’t available in a way we can look at it”, she adds. “Even if we had the data, it is very hard to analyse it because there are so many confounding factors.”

For example, the power lines could be blamed, but children spend hours away from home in schools and in other places that may increase risks in some unknown way.

Burying the power lines would answer all questions, because the fields are diminished by soil and the cables would have to be buried deep to keep them away from diggers and anything that can disturb them. This though would triple the cost of installation, with the extra expense effectively wasted on what is likely an unnecessary option so long as a 50- or 100-metre exclusion zone exists.

The visual intrusion is another issue, but one that cannot be solved by science.