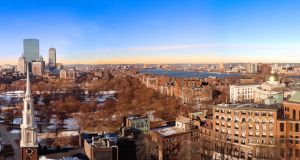 
The application of smart cities technology is helping Boston to get more children walking to school. The city is also using data from its Hubway city bike rental system to reduce road transport congestion.

A conference at NUI Maynooth yesterday heard from Irish and international speakers about how developing smart cities could improve quality of life for urban dwellers.

Greater efficiencies in controlling traffic flows, water usage and energy consumption would yield benefits, as would changes that empowered the citizen, said conference organiser Prof Rob Kitchin, director of the National Institute of Regional and Spatial Analysis at NUI Maynooth.

‘Messy work’
Fitting raw data from many sources across a city into something that would make a difference to people was “messy work” but an effort that could deliver benefits, said Boston-based Tim Reardon.

“How does the technology side match up with the human side is the issue,” he said.

The five-year study in Boston involved 5,000 subjects, with the aim of understanding trends in the city, and the growth of the region.

One result was “Boston green”, a phone app that provides information on the city’s green spaces and how to find them. “It takes really sterile data sets and makes them usable,” he said.

The technology could be considered obtrusive by some and a benefit by others, suggested Prof Matt Wilson of Harvard University. He used as an example Jawbone Up, a sensor band worn around the wrist that collects data from the wearer on sleep patterns, level of physical activity and eating patterns.

It links with a smartphone app to analyse your data, and allows you to compare your performance against others. Yet the data is also available to third parties and he asks would people want this kind of personal detail being pushed back, say, to city planners or companies.

Programmable City
The conference was keyed to the launch of the Programmable City Project, to be headed by Prof Kitchin. Funding is from a European Research Council research award of €2.3 million and from Science Foundation Ireland. Its impact on people “will be profound”, said Minister of State for Research and Innovation Seán Sherlock.