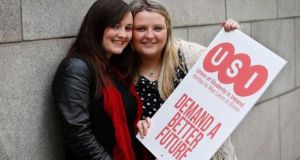 Student Amée Dunne (left) and her fiancé Kathryn Nea at the launch of USI campaign: “We have an opportunity to protect our children, who are being bullied for being attracted to someone of the same gender. It’s not right and it’s not fair and it’s not equal.” Photograph: Conor McCabe Photography.

On a bleak November afternoon, hundreds of students lined up to fill in voter registration forms at a stand in University College Cork (UCC). They smiled as they posed for selfies in the queue, proud to be doing their civic duty.

By the end of the 15-day student-run registration drive, 3,677 first-time voters — nearly 20 per cent of the UCC student population — had been signed up. James Upton, the outgoing auditor of the UCC LGBT society, had manned the stand with other volunteers from 10am until 4pm every weekday for the duration of the three-week campaign.

The efforts of UCC activists are just one strand in the story of how young people mobilised in historic numbers ahead of yesterday’s marriage referendum. Speaking on Newstalk about yesterday’s high voter turnout, Minister for Communications Alex White, the Labour Party director of elections, said there had been a “remarkable” galvanisation of young voters in recent weeks.

“We couldn’t have won it without them,” Colm O’Gorman, director of Amnesty International Ireland, told Morning Ireland earlier today.

At least 27,633 young people were directly registered to vote this academic year by the Union of Students in Ireland (USI), which secured a unanimous mandate from its members to support marriage equality in 2012. Laura Harmon, the USI president, attributes the success of campus registration drives to the momentum created by student campaigners. “We have had a very engaged LGBT student community for many years now,” she says. “You only need to look at the way people have campaigned for LGBT flags to be flown on different campuses and tried to get exam dates changed so students could vote in the referendum.” Young people engaged in the campaign for marriage equality because they understood the direct impact it would have on gay friends and family members, adds Ms Harmon.

Ian Power, the executive director of youth information website SpunOut.ie, agrees. “Personal testimonies have been very important,” he says. “Previous referenda — on the Seanad, the Court of Appeal, judges’ pay and Oireachtas inquiries — were all about the system, which young people can find hard to connect with on a personal level. But with this referendum, people understand the consequences. They know that this is an issue that affects the lives of real people.”

Sinéad Jordan, an undergraduate at NUI Galway, said that if she had children, she would hate to think of raising them “in a society where they could be judged for simply being who they are.

“I don’t want to have greater rights than my friends just because I happen to be a woman who is attracted to the opposite sex.” She didn’t expect, she says, “to become so emotionally invested” in the issue.

Perhaps one of the most noteworthy aspects of the Yes campaign was its use of social media to mobilise first-time voters. In the final weeks of the campaign, Yes Equality was reaching 1.6 million people a week on Facebook, according to its social media director, Craig Dwyer. By the end of campaign, over 150,000 people had uploaded the Yes Equality twibbon, a slogan for online avatars, to their profile photos on social media.

“Social media has played a huge role in this campaign, more so than any before it in Ireland,” says Mr Dwyer. “The vast majority of young people are in support of a Yes vote, so we knew it was crucial to make sure that we mobilised this support to ensure a huge turnout on the day, and social media was the way to do this.”

Facebook, Twitter and Instagram were especially important in promoting registration drives, he says. “During ‘Register to Vote’ we had so many celebrity endorsements such as Hozier, Colin Farrell, Anjelica Huston and Aidan Gillen sharing images of themselves holding ‘I’m Ready to Vote’ signs, which became news stories themselves.”

Students groups and societies also used online platforms to build momentum ahead of the vote.

But why has the issue of marriage equality galvanised so many more young people than other referenda and elections? “[Young people] are slower to vote in general elections because they don’t feel they have the same stake in society as older people,” according to Dan O’Neill, an activist with Young Workers’ Network, which is led by young trade unionists. “Because they’re on zero-hour contracts and low wages, and rent and house prices are so high, they are struggling to make ends meet and aren’t settling down at the same age as their parents would have. Politicians don’t often talk about these types of crises. This issue [of marriage equality], on the other hand, affects people regardless of what stage of life they’re at. We all know someone who is openly gay.”

Yes Equality Donegal volunteer Declan Meehan, who is studying for a master’s at Queen’s University Belfast, makes a similar point. “There is a perception that the policies of political parties don’t directly affect [young people], which isn’t necessarily a correct view. But I think that says a lot about the demographics that political parties target, especially in a rural area like Donegal where a lot of politicians don’t engage with younger voters.”

Ireland’s youth “are realising they have the power to show the world that our country can represent something other than the Catholic stereotype,” according to UCC student Craig Butler, who first came out to a friend at the age of 14. His friends, he says, “have taken up the cause and really thrown themselves into it. It made me feel so proud [that they] care so much about my rights.”