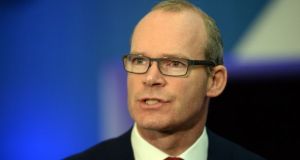 Minister for Foreign Affairs Simon Coveney said Covid-19 rules were breached by American troops due to an ‘error on the US side’. Photograph: Cyril Byrne/ The Irish Times

US military troops travelling into Shannon Airport on a recent flight breached Irish Covid-19 regulations due to an “error on the US side,” Minister for Foreign Affairs Simon Coveney has said.

The flight, which included five crew and 48 US military personnel, landed at Shannon from Bahrain on January 25th. Those on board then stayed in a Limerick hotel overnight, leaving at one point to buy food, before flying on to the US the following day.

At the time all passengers were required to present a negative Covid-19 PCR test on arrival in Ireland, and complete a passenger locator form.

In response to a parliamentary question from Social Democrats TD Cian O’Callaghan, first reported in the Irish Examiner, Mr Coveney said the US military personnel had breached Covid-19 regulations.

“Due to an error on the US side, the passengers on the flight did not present evidence of negative PCR tests nor complete passenger location forms,” he said.

Following instructions by An Garda Síochána, the US military troops “self isolated in a hotel in Limerick overnight, only leaving once to purchase food, while masked,” Mr Coveney said.

After gardaí reported the incident, the matter was raised with the US embassy in Dublin, and through the Irish Embassy in Washington.

“The US authorities have undertaken a review of the circumstances which led to this breach,” Mr Coveney said.

“They have also confirmed that the passengers concerned were operating in a ‘clean bubble,’ were tested repeatedly during the period they were deployed in the location where the flight originated.”

Mr Coveney said it was “clear” that Covid-19 regulations around people travelling into Ireland “were inadequately communicated by the relevant US authorities across the entire US government system.”

The breach of public health regulations was “a serious matter,” and the Irish Ambassador in Washington had emphasised to senior officials “that all landings must fully abide by the conditions put in place by the Irish authorities,” he said.

“My department and our Embassy in Washington have received apologies, both orally and in writing, from the relevant US authorities, including the US military authorities. The US side has recommitted to full compliance in respect of future landings,” he said.

Commenting on the incident, Mr O’Callaghan said it was “not acceptable” that US military troops landing in Shannon failed to comply with public health regulations.

“The US authorities have confirmed that these troops left their hotel quarantine to purchase food,” he said.

“The Irish Government have taken a completely lax approach to monitoring the activities of US military that go through Shannon. It is very important that public health rules are applied across the board – people are making huge sacrifices to suppress Covid,” he said.