Lobbying for second time, Republican warns against ‘beginning of a troubling trend’ 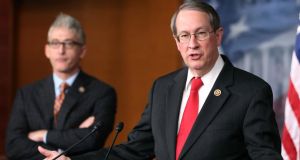 A US congressman has written again to the Irish Ambassador in Washington urging the Government to scrap plans to introduce plain packaging on cigarettes.

Bob Goodlatte, a Republican from Virginia, told Ambassador Anne Anderson that the proposal would mark the “beginning of a troubling trend” of countries restricting the intellectual property of legal products.

The 11-term congressman is the latest US politician to lobby the Government to stop Ireland becoming the first country in the European Union – and the third in the world after Australia and New Zealand – to remove all trademark branding and logos from cigarette packets in a bid to clamp down on smoking.

Mr Goodlatte’s state is home to the world’s second largest tobacco company, Philip Morris, the maker of Marlboro and Benson & Hedges cigarettes, which employs about 4,000 people in Virginia.

“I believe plain packaging would unfairly restrict the intellectual property of a legal product and that such a policy sets a dangerous precedent for other legal products that critics may cite as causing health concerns – for example, alcohol products and foods containing sugar or that are high in fat,” Mr Goodlatte wrote in a letter with Tuesday’s date.

“I believe such a move would mark the beginning of a troubling trend of countries restricting the intellectual property of legal products about which they may philosophically disagree.”

He warned that undermining intellectual product would be “an invitation for counterfeit goods” that are dangerous for consumers and that it would be “very difficult and costly” to combat the trafficking of counterfeit goods, which are often linked to other forms of crime.

He urged the Government to consider other ways to regulate tobacco that do not jeopardise intellectual property rights.

This is the second time the 11-term congressman has written to the Ambassador calling for the proposal to be scrapped. Mr Goodlatte, chairman of the powerful House of Representatives judiciary committee which oversees intellectual property in the US, and three fellow congressmen wrote to Ms Anderson in October 2013.