Upgrades to Irish Embassy in Beijing cost €600,000 over two years

Total bill included more than €82,000 in the three-week lead-up to President Higgins’s visit 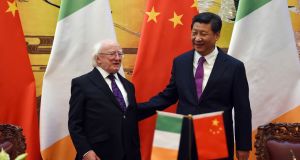 More than €600,000 was spent on upgrades to the Irish Embassy in Beijing over two years, including almost €11,000 on garden and terrace furniture, according to new figures.

According to figures released by the Department of Foreign Affairs in response to a Freedom of Information (FoI) request, the State paid €10,990 for outdoor, garden and terrace furniture at its China embassy last November and in December 2013, while €624,218 was spent on upgrades over two years.

The €1,808 spent on replacing outdoor furniture in November was part of €82,421 spent over 21 days in the lead- up to the week-long state visit by President Michael D Higgins in December.

A Department of Foreign Affairs spokeswoman said the garden furniture spend in 2013 included armchairs, eight dining chairs, a dining table, a table and four stools. In December 2013 €1,000 was also spent on 15 vases.

Ahead of President Higgins’s visit on December 7th, the embassy spent €1,580 on a presidential podium; €1,497 on the “framing and mounting of art”; €1,018 on the restoration of an antique table on November 26th; €7,030 on the replacement of doors at the embassy and chancery on November 26th and €8,633 on all doors replaced at chancery representation area on the same date.

The €82,421 outlay also included €30,243 on staff quarters at the embassy, with part of the spend to comply with health and safety regulations.

The department spokeswoman said the embassy, including the official accommodation, was built in the early 1950s and “in the 15 years or so prior to 2013, the buildings had seen only minimal, periodic maintenance.

“In a city where outside venues and catering is very expensive, the embassy premises is a venue perfectly suited and extremely good value for these Irish promotional and negotiating engagements.”