State papers 1986: Event came after series of allegations about the regiment 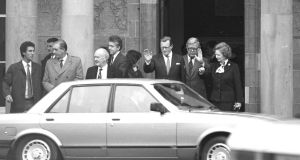 British prime minister Margaret Thatcher flanked by Geoffrey Howe and Tom King wave goodbye after the signing of the Anglo-Irish Agreement in Hillsborough, Co Down, in May 1985. Photograph: Pat Langan

A snub to a direct rule minister over a UDR regimental dinner in the wake of the Anglo-Irish Agreement provoked the ire of the Northern Ireland secretary Tom King, files from 1985 declassified by the Public Record Office in Belfast reveal.

The event came after a series of revelations and allegations concerning the regiment, notably from the Irish government. The concerns around the locally-recruited and overwhelmingly Protestant regiment were thrust to the fore in May 1985 in a speech by taoiseach Garrett FitzGerald in the United States.

According to a memo by S G Hewitt of the Political Affairs section of the Northern Ireland Office (NIO), the taoiseach surprised British observers by saying the future of the regiment would be discussed in the current round of Anglo-Irish talks while “the behaviour of the UDR contributed to the alienation of Nationalists”. One-third of its membership was “very dangerous”, he declared.

At the same time, the British ambassador in Dublin, Sir Alan Goodison, reported to the NIO that an Irish official, Dáithí Ó Ceallaigh of the Department of Foreign Affairs, had posed a series of searching questions linking the UDR and criminality.

Ó Ceallaigh’s file contained a detailed list of crimes committed by the UDR since 1971, including a bomb attack on a Catholic church in 1973, the murders of James and Mary Devlin at Edendork, Co Tyrone, in 1974, the murders of three members of the Miami Showband in 1975 and of three Nationalists in south Derry in the same year.

They concluded with the alleged UDR involvement in the murder of Adrian Carroll, a young Nationalist in Armagh in 1983.

In his response to the dossier, A W Stevens of the NIO – a firm defender of the UDR – admitted “the list makes unhappy reading” but latched onto the remark of Michael Lillis, a senior Dublin official, that it had been “compiled in haste”.

On September 18th, 1985, on the eve of the signing of the Anglo-Irish Agreement, David Hill of the NIO reported to NIO ministers that the UDR guard was to move from Castle Street on the city centre fringe of west Belfast.

Meanwhile, it became clear the British Cabinet secretary Sir Robert Armstrong was pressing for the removal of the UDR from “sensitive” [ie Nationalist] areas. This evoked the ire of Stevens, who said: “I need hardly add that we could not expect the RUC to produce the numbers of spare policemen.”

He also attacked Irish representations that the UDR should be removed from “that part of Armagh with which Mr Seamus Mallon [of the SDLP]is associated”.

The regiment was soon to raise the hackles of the British government itself. On November 22nd, 1985, the Stormont direct rule minister Lord Lyell was invited to the UDR regimental dinner at Ballykinlar military camp in Co Down. However, in a note in the file dated November 21st, 1985, Linda Rogers, Lyell’s private secretary, informed the secretary of state Tom King that Brigadier Harry Stevenson had asked Lord Lyell not to attend. Simultaneously, the minister was informed by Unionist MP Ken Maginnis that many of those due to attend the dinner had “threatened to stay away because of Lord Lyell’s presence”. Clearly, though it is not stated in the file, this rebuff was due to the hostility of UDR members to the Anglo-Irish Agreement (just signed). As a result, the commander, Harry Stevenson asked the minister not to attend.

In a note to Tom King, Jonathan Stevens of the NIO reported: “Sir Robert said he thought it a most unfortunate incident which raised questions about the UDR. Its implications would need to be carefully considered.” The general officer commanding undertook to take up the matter with the commander of the UDR.

Meanwhile, on December 11th, 1985, R P Cleasby, private secretary to the secretary of state, informed Stevens that King wished him to explain to the general officer commanding “his great displeasure over the incident”. King, he said, believed the commander of the UDR should be asked to explain the behaviour of his second-in-command.