Thousands will not be able to buy homes, says report 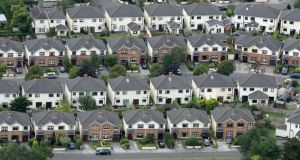 According to a senior advisory group to the Taoiseach, many families will in future “have little chance of buying their own home” and will have to turn to social housing or rental properties. Photograph: Frank Miller

A range of social classes will “find it difficult if not impossible” to buy their own homes in the future, according to a senior advisory group to Taoiseach Enda Kenny.

A report, presented to Mr Kenny by the National Economic and Social Council (NESC), also suggests that many families “will have little chance of buying their own home” and will have to turn to social housing or rental properties.

These include those on lower incomes, single earner homes, single parent homes and single person households. Research carried out for the introduction of water charges showed about one-third of households were single adult dwellings.

The Cabinet considered a memorandum from Mr Kenny on the report from the NESC, which advises the Taoiseach on a number of issues, ahead of the launch of the Coalition’s social housing policy.

Minister for the Environment Alan Kelly will announce this morning that 90,000 households will “have their housing needs met” by 2020.

In setting out his social housing strategy, the Minister will announce a longer and more ambitious strategy than previously signalled.

Home Ownership and Rental: What Road is Ireland On?

It says a number of past policies – such as local authority loans, mortgage interest tax relief and tenant purchase schemes – gave Ireland one of the “highest rates of home ownership in recent decades”.

“The increasing share of rental accommodation partly reflects the removal of these supports for home ownership and reduced provision of social housing. There now needs to be a systemic and honest exploration of aspirations, goals and possibilities for home ownership.”

The NESC is chaired by Martin Fraser, the secretary general at the Department of the Taoiseach, and includes representatives from business organisations and unions, as well as environmental, community and agricultural groups. There are also independent members.

“While it is difficult to extrapolate future trends from the period 2006-2011, which was unusual in many respects, there is reason to believe that a range of social groups – particularly those on low incomes, single earner and single person households and lone parents – will find it difficult if not impossible to achieve home ownership in the decades ahead,” its finding say.

“While home ownership was traditionally high across the class spectrum, it seems likely that in the coming decades housing options will differ more.”

Housing policy must now address current Irish trends, it adds, such as whether home ownership or long-term rental should be promoted.

Separately, an unpublished report seen by The Irish Times has found that nine out of 10 private rented dwellings in Dublin inspected by environmental health officers were found to be in breach of housing standards legislation.

Among the breaches found were mould growing on ceilings, live exposed wires, plaster collapsing from a ceiling, severe damp and missing or damaged smoke alarms.