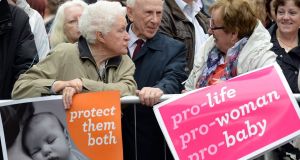 A section of the crowd at Merrion Square for the pro-life rally. Photograph: Cyril Byrne/The Irish Times

About 4,500 people rallied in Dublin today at a Pro-Life Vigil, which organisers said would be “the first step in a campaign dismantle the abortion law”.

While gardaí on the scene put the crowd at what the organisers described as a ‘National Vigil For Life’ at about 3,000, the organisers said there were 15,000. The crowd filled about a third of one side of Merrion Square.

Organised by the Pro-Life Campaign, the rally heard recommendations that people should not vote for candidates from parties who had “broken their pro-life promise”.

There was also strong criticism of the media which, speakers said, had helped push the Protection of Life in Pregnancy Act through last summer without critically analysing it.

Cora Sherlock, deputy chairwoman of the Pro-Life Campaign, said the passage of the legislation last July was a “shocking example of the tragic breakdown in Irish politics”. There had been no honest debate about the legislation, she said.

“The politicians and the abortion lobby said there was a real need for abortion legislation to save women’s lives. We know there was never any need for this legislation. Essential life-saving medical treatment is there that was always legally available.

“Most seriously the tragic death of Savita Halappanavar was misused by major players in politics and the media.”

She said they were more concerned with getting abortion legislation passed than accurate reporting.

Such journalists, she said, were more concerned with setting the agenda than reporting on it.

“There is something rotten at the heart of Irish public debate.” She said this was as a result of “corruption” and the pro-life movement could not “sit back and tolerate this any longer”.

It was important the pro-life electorate be “mindful” of the parties that had let the movement down when casting their votes, she said.

Caroline Simons, legal advisor to the Pro-Life Campaign, said after last year’s “setback”, they had no idea how many people would turnout today.

“We realise it’s going to be a difficult road back but we are massively encouraged that so many people are ready to get on board at this stage to help turn things around.

“Senior members of Fine Gael assured their backbench TDs that once the abortion bill passed through the Dáil they would have nothing to worry about because the pro-life movement would be crushed and beaten. How wrong they were.

“Your presence here today is proof that we are wasting no time in starting to rebuild. It’s going to take time, but when the public comes to realise the full horror of what the new legislation involves support for the repeal of the law will gather pace.”

Lynn Coles of the Women Hurt told the vigil that in recent weeks she had counselled a woman who had been considering an abortion. She decided to proceed with it.

“She took her own life on Tuesday. Abortion took not only her baby’s life but her own. She leaves behind a husband and grieving extended Irish family on both sides of the Irish Sea. The media will not cover her story. This is the reality of abortion.”