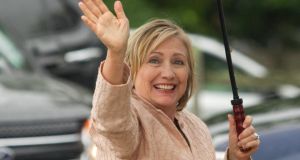 Hillary Clinton: has yet to declare whether she will run as a presidential candidate in the next US elections. Photograph: Matthew Healey/The New York Times

The organisers of tonight’s Dublin fundraiser for Hillary Clinton hope to use the event to establish a network of US supporters in Ireland in expectation that she will declare her presidential candidacy for 2016 early next year.

About 50 guests are due at the home of husband and wife Brian Farren, a barrister and US citizen, and Linda O’Shea Farren on Raglan Road in Dublin, each contributing $1,000 or $5,000 to attend the first Irish fundraiser in the latest campaign for Mrs Clinton in anticipation of her deciding to run for the Democratic nomination for the White House.

The couple hosted a similar event at their Ballsbridge home for Mrs Clinton in November 2007, attended by her husband, the former president Bill Clinton, as part of her unsuccessful 2008 presidential campaign which she lost to Barack Obama.

Brian O’Dwyer, a New York lawyer and a prominent figure in the Irish-American community, has organised the fundraiser in his capacity as a member of the national finance committee of Ready for Hillary, a campaign group known as a super political action committee that can build a multimillion election war chest to help a candidate.

“The idea is to build a grassroots operation where people can give money and then we can use it digitally to build up a database so that, if and when she announces that she will run, there are millions of people who have already supported her candidacy,” said Mr O’Dwyer.

US election campaign rules only permit the Dublin fundraiser to accept donations from American citizens and US green card holders.

Mr O’Dwyer said he hoped to organise a major event in Dublin attended again by Bill Clinton if Mrs Clinton announces her candidacy.

“There are certainly Democrats and women Democrats who are clearly excited about her candidacy,” he said. “She is getting that type of vibe from all of her friends who are really relying on her to carry the banner.”

Today’s fundraiser falls on the same weekend as the American football game between Penn State and the University of Central Florida at Croke Park, an event that has attracted more than 17,000 Americans to Ireland.

Irish-American Martin O’Malley, the governor of Maryland and former mayor of Baltimore, is another politician tipped as a potential Democratic candidate in 2016. Mr O’Dwyer described him as an “incredibly accomplished person” but said that many Irish Americans remember the Clintons for bringing peace to Northern Ireland.

Mr O’Dwyer said he had invited former presidential candidate Gary Hart and George Mitchell, the former US senator who helped broker the Belfast Agreement in Northern Ireland, but had yet to hear back from them.

A $5,000 donation offers membership to the Ready for Hillary national finance committee where donors will receive briefings as the campaign progresses.