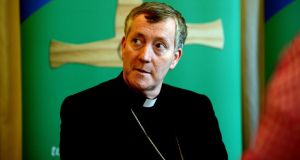 Accord’s president Bishop Denis Nulty said in a statement he was “very disappointed that Tusla has made this funding decision. Photograph: Cyril Byrne/The Irish Times

The Government rejects claims that State funding for marriage preparation courses provided by a Catholic support agency was withdrawn because of the church’s opposition to the same-sex marriage.

Accord, a Catholic Church run agency which offers marriage preparation courses and counselling, lost €378,000 in State funding for 2015. The withdrawn funding was for pre-marriage courses.

Coalition figures say funding will still be provided to Accord for counselling services from Tusla, the Child and Family Agency, which operates under the auspices of the Department of Children.

The Irish Catholic newspaper said the move “will give weight to fears that have been raised by church leaders that Catholic agencies who do not support the Government’s agenda on the redefinition of marriage will be starved of funding”.

A spokesman for Minister for Children Dr James Reilly said Tusla’s decision has “nothing to do with the” upcoming referendum.

Accord’s president Bishop Denis Nulty said in a statement he was “very disappointed that Tusla has made this funding decision which will certainly undermine a vital service provided to women and men preparing for marriage”.

In a statement, Tusla said its budget was signed off by Dr Reilly on April 17th and the agency’s board the following week.

The Tusla letter also informs Accord that the decision to cut funding is retrospective and took effect on January 1st, despite the fact that the letter is dated May 7th.

“The basis on which decisions were made was a set of criteria which measured impact on the protection and welfare of children,” said a Tusla statement.

“While Tusla values the work of marriage preparation courses and recognises their value for the long-term benefit of children, it was necessary at a time of limited resources to prioritise those services operating more directly at the front line.

“A number of services offered by Accord match this criteria and will be funded by Tusla in 2015. Last year Accord received €1.992 million in funding from Tusla and this year will receive €1.6 million.”

In comments to the newspaper, Bishop of Elphin Dr Kevin Doran questioned whether the withdrawal of the funding is “part of a wider policy” of the Government to withdraw financial support to Catholic Church agencies.

Dr Doran said, “It seems to me that if the State does have a commitment to marriage, as the Constitution requires it to do, it is a rather strange move to be withdrawing funding from pre-marriage preparation courses.

“We did express concern in a pastoral statement in March that this could happen and certainly some of the comments coming from the Taoiseach would indicate that he would expect Catholic schools to change what they teach in relation to marriage and the family.

“I also think back to two years ago when the then minister for health [James Reilly] threatened to remove funding from Catholic hospitals if they didn’t conform to the law on abortion. It is now the same Minister who is responsible for Tusla.”

2:44 Miriam Lord: What the actual...? Martin blooded as Taoiseach after he wields axe on Cowen