Party calls for scaling back of USC, abolition of water charges in pre-budget submission 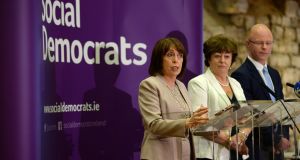 Róisín Shortall, Catherine Murphy and Stephen Donnelly at the launch of the Social Democrats party in July.Photograph: Dara Mac Dónaill /The Irish Times

The Social Democrats have proposed a junk food levy and increased alcohol excise, excluding wine, in the party’s pre-budget submission to bring in € 225 million.

The party is also calling for the abolition of domestic water charges and a progressive scaling back of the USC, targeting all reductions to earnings below € 70,000,

A € 321 million investment in childcare is also part of the Social Democrats’ plans.

Three prominent Independent TDs came together to form the party in July. They are Catherine Murphy from Kildare North, Wicklow’s Stephen Donnelly and Róisín Shortall, who represents Dublin North West.

The party believes a new tax on foods high in saturated sugar, salt and saturated fats would yield € 188 million.

A levy aiming to yield half that amount (€ 94 million) in a year is proposed, with € 9 million reinvested into “prevention activities”.

The Social Democrats say an additional € 22 million could be raised by applying excise of 20 cent on a packet of cigarettes.

A total of €118 million could be raised by applying excise of 10 cent on pints of beer and cider and on single measures of spirits.

The party does not propose increasing excise on wine, on the grounds that previous budgetary increases have been “extremely high”.

The abolition of domestic water charges would cost €13 million, according to the party.

Mr Donnelly said Irish Water should be retained as an entity, adding that the party was “open to a conversation” that water could be paid for through a charge in the future if that was what the people wanted.

He said the party was strongly opposed to people paying twice.

The party says its proposals on childcare would be a “game-changer” for families.

The pre-budget submission proposes two weeks paid paternity leave and an extension of paid parental leave to 36 weeks, increasing to 52 weeks by 2018.

A second free pre-school year should be phased in from September 2016, the party argues.