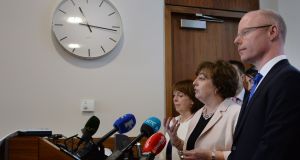 Abolishing water charges and cutting insurance and energy costs could be done with virtually no exchequer cost, according to the Social Democrats.

Launching the party’s election campaign in Dublin with the slogan “Reducing the cost of living”, co-leader Catherine Murphy also stressed their strategy of leaving all coalition options open.

“We’re certainly not going to be a mudguard for anyone,” she said. Co-leader Róisín Shortall a former Labour minister of state said “there is no point being in government unless you have power. We’re not interested in being in government merely to make up the numbers”.

Co-leader Stephen Donnelly claimed the Government is “selling the Irish people the line that we can have US-style taxes and European-style service and you can’t. If you accept US taxes you will have continuing disinvestment in services”.

At the launch Ms Murphy said they wanted to put “more money back into people’s pockets and we want do it in a very different way, a very even way” that would be mainly through reduced costs and reform.

Pledging affordable childcare with one year’s paid parental leave, the party used the charity Barnardo’s costs of €105 million. The EU average of parental leave is 19 months compared to six months in Ireland, the Social Democrats claimed.

Reducing prescription costs would cost € 60 million and free GP care for the under 18s would cost a similar amount, the party said.

Their childcare proposals including one year parental leave and increased capitation links would cost €240 million while the price for reducing third level fees by €1,000 to €2,000 would be €68 million.

Posing for photographers and camera crews with most of the party’s total of 14 candidates, Ms Murphy held up a massive scissors and quipped “anger is my best emotion - deployed positively”.

Stressing the possibility of cutting costs in three areas with minimal exchequer investment Ms Shortall highlighted insurance cost reforms. She said there should be more information sharing between insurance companies to reduce fraud , which had been done successfully in Northern Ireland.

She also said they wanted to reform how awards are set by the Personal Injuries Board and how they are awarded by the courts.

She stressed that the party’s emphasis “is not so much on income but on costs”.

Mr Donnelly said consumers could save up to €260 a year by “ending the idiocy of a charging system that is costing as much as it is collecting”.

The engineers and other staff were already in place from the local authorities. He said the investment was supposed to be between €5 billion and €10 billion but they were currently only spending about €200 million annually in investment.

Ms Shortall said over one million people were not in the Universal Social Charge (USC) net and the Government’s using €4 billion to abolish that would be of no benefit to them.

She said it would be much more beneficial to scrap the water charges and that not one cent of the average €260 charge was being used for investment in water services.

Mr Donnelly also hit out at the Government’s figures and said that their “fiscal space or potential money available” which they originally set at €12 billion had been reduced to €3.2 billion, following the intervention of the Fiscal Advisory Council, but it would cost €4.5 billion to abolish the USC.