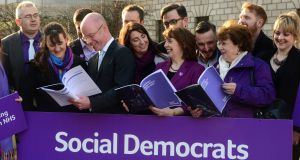 The next government should not reduce taxes but instead use all available resources for investment in services, the Social Democrats have said.

The party said its manifesto, which sets out policy priorities for the next 10 years, including the creation of an Irish version of Britain’s National Health Service, offers a vision for how “a proper, stronger Ireland can be created”.

The Social Democrats is led by three TDs: Wicklow’s Stephen Donnelly, Dublin North-West’s Róisín Shortall and Kildare North’s Catherine Murphy. It has 14 candidates standing in the election. If half of them were to be elected to the Dáil, it would be considered a successful first election for the party, Ms Murphy said.

While the manifesto did not set out costings for its proposals, the three TDs said it was a statement of a political vision for the next decade, rather than a budgetary document.

Ms Murphy said it was not the intention of the Social Democrats to be a “mudguard” for the next government. “We have a vision here. It is not a shopping list. If it is not compatible with that vision, we would end up being a mudguard,” she said.

Ms Shortall said the party’s position on taxation was clear.

“We don’t intend to increase taxes nor will we cut them. Our emphasis is on reducing the cost of living for all families. We have set out a number measures we would take to do that, because that puts money back in people’s pockets.”

An “Irish National Health Service, a publicly funded health service that would be accessible to all, improve health outcomes and reduce the cost to deliver high quality healthcare” is a central plank of the manifesto.

Mr Donnelly said the development of a modern health system would need an investment of “several billion” euro.

Ms Shortall said: “We are not saying everything can be implemented. We’re not suggesting that for one moment. We are setting out a vision that we hold for this country over the next 10 years.”