Shane Ross has failed to fill 35 State board vacancies 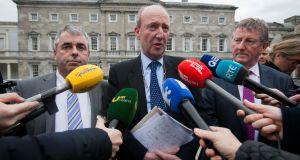 Minister for Transport Shane Ross has failed to fill 35 vacancies on State boards since taking office.

The figures were released from the Department of Transport, Tourism and Sport to Fianna Fáil TD Robert Troy.

They show two vacancies on the board of the Road Safety Authority since the start of September.

Three members need to be replaced on Iarnród Éireann’s board and four on the Taxi Advisory Committee.

Mr Ross has not made any appointments since becoming Minister in May, though he has renewed 16 contracts.

However, Mr Troy claimed the Minister had become “paralysed by his own indecision”.

“This shows how detached the Minister is from his responsibilities as Minister for Transport, Tourism and Sport,” he said.

“I would have concerns in particular with the vacancies with the Road Safety Authority.

“People are now questioning whether he is compromising the work of the board, and I think he should come out and say why he is not filling the gaps that exist.”

There are 25 boards under Mr Ross’s remit, including the RSA, Dublin Bus, Fáilte Ireland and Bus Éireann.

The figures released show voids on 16 of those.

The biggest gap is in the New Ross Port Company, which has five vacancies. Galway Port Harbour has four and three exist on the Transport Infrastructure Ireland board.

In response to a recent parliamentary question, Mr Ross did confirm that he had some concerns about the manner in which board members were chosen.

The Minister said he was considering how the appointment processes can be enhanced to ensure “in so far as possible, the best appointments are made to these Boards”.

The Department of Public Expenditure and Reform has issued guidelines on State board appointments.

Under these guidelines, the Public Appointments Service (PAS) advertises vacancies on the State Boards portal. Assessment panels are used to examine all applications and test their suitability.

Each Government department is then notified of all candidates that meet the advertised criteria. Where a reappointment is proposed, the PAS process does not apply.

Fianna Fáil said it was time for the Minister to outline his difficulties with the Public Appointment Service and how he intends to act on them.

“Now, I know he finds it hard to make decisions,” Mr Troy said.

“But that is the responsibility he has been charged with. It is time to step up to the plate and fulfil the duties he was tasked with.”

While an opposition TD, Mr Ross raised similar issues around the PAS and called for an independent commission to approve appointments.

He has said those who fill boards should be asked to appear before an Oireachtas committee to determine whether they are qualified.

The Dublin-Rathdown TD said Dáil committees would vote on their appointments and that an applicant must have two-thirds of the vote before their position could be ratified.

He also called for the number of semi-state bodies and agencies to be reduced significantly.

The Minister chose not to use the PAS when appointing a new chief executive for Fáilte Ireland.

Instead, he is using a private recruitment company, Amrop, in the search to replace Shaun Quinn, whose term ends in December.

The decision has been strongly criticised by Labour TD Alan Kelly.