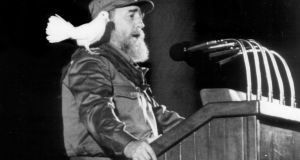 A file image from 1989 shows a white dove landing on Cuban president Fidel Castro’s shoulder as he delivers a speech to Cuban youth in Havana.

Suggestions that President Michael D Higgins neglected human rights concerns in his statement on Fidel Castro are “both unsustainable and unwarranted’’, his spokesman has said.

“The President has discussed human rights concerns with representatives of the government of Cuba on every occasion he has had meetings in Cuba, Ireland and elsewhere,’’ the spokesman added.

“In all of his speeches on human rights, the President has emphasised the universality of human rights and has never shirked from the presentation of that view.’’

In his statement, President Higgins had praised Cuba’s literacy rates, health service and economic growth, adding Castro was “a giant among global leaders whose view was not only one of freedom for his people but for all of the oppressed and excluded peoples on the planet’’.

The President said economic and social reforms introduced in Cuba “were at the price of a restriction of civil society, which brought its critcs’’.

Responding to criticism from some politicians and human rights activists, the President’s spokesman said his statement had clearly referred to the price paid for social and economic development in terms of civil society and the criticisms it brought.

“This, obviously and unambigiously, included the human rights organisations and activists who have always had the support of the President,’’ the spokesman added.

He said the President had made reference to opportunities provided by restoration of diplomatic relations with the United States and the response which had come from the visit of Pope Francis. This was a reference to the release of prisoners, he added.

The spokesman said the President’s statement had not been submitted to the Government for approval in advance, nor was it the practice to do so.

He said President Higgins had no plans to travel to Havana to attend a memorial service for Castro.

A number of memorial events are taking place in Cuba this week, with a ceremony likely to be attended by foreign leaders on Tuesday. 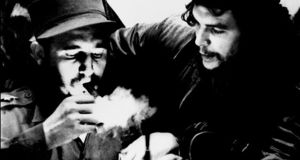 The President requires the Government’s formal permission to leave the State and, one Minister said it would be unlikely to stand in his way if he wanted to travel. The President has a full programme for this week and there are no plans to change it.

“The President is quite entitled to make his views known on the passing of Castro,’’ said Charlie Flanagan.

Speaking on RTÉ’s The Week in Politics on Sunday, Mr Flanagan said he respected the right, in the first instance, and the view of President Higgins.

“If you go back over the past 40 years, nobody in Irish politics has done so much work, or had such an association with Latin American politics, than Michael D Higgins,’’ he added.

The Minister said Castro was “the last of the big strong men of the Cold War era ’’, adding he was “a complex figure with a very mixed legacy’’. He said he had not agreed with much of what Castro said or did.

“I am not a fan of his, but I come from an historically different position than President Higgins,’’ Mr Flanagan added.

Amnesty International’s executive director in Ireland Colm O’Gorman, in comments on social media on Sunday, said some people seemed to want to ignore Castro’s “horrific’’ and “monstrous’’ abuse of civilian and political rights for some 50 years.

“Any suggestion Castro’s delivery on social rights balances out his appalling violations of civilian and political rights is also nonsense,’’ he added.

“Both are caught in blindness of personal ideologies,’’ he added.

He said President Higgins was “silent regarding the long catalogue of abuses of power by Castro over his long rule.

“He even goes on to call those millions of exiled Cubans, and others who opposed the theft and oppression of the Castro regime, as ‘critics’,’’ Mr Mullen said.

“This is disgraceful equivocation about grave wrongdoing.’’

Mr Mullen said the President was not entitled to play politics.

“He can have his private views about Castro and his communist revolution, but when he releases an official statement as President of Ireland he is speaking on behalf of the people of Ireland,’’ he added.

Sinn Féin TD Louise O’Reilly said on the The Week in Politics that President Higgins was very knowledgeable on Latin America issues. “I think there was some mention about concerns,’’ she added.

She said Cuba’s health services and literacy programme should be looked at. “The tallest building in Havana is not an office block...it is a hospital,’’ she said.

Independent TD Stephen Donnelly said colourful statements were expected from President Higgins and he had no problem with him making the remarks. “He certainly was not speaking for me,’’ he added.

A leader murdering thousands of people would not have his respect, he added.