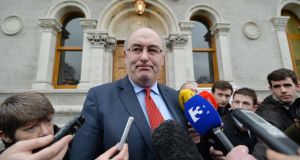 Phil Hogan is expected to finalise his team of advisers during the next few weeks, as he prepares to take responsibility for the European Commission’s agriculture portfolio, pending approval by the European Parliament.

Dermot Ryan, a senior Department of Agriculture official, who is currently an attaché to Ireland’s Permanent Representation in Brussels, will also join Mr Hogan’s cabinet of six to seven people.

Mr Ryan, who worked for Fianna Fáil agriculture minister Brendan Smith for a period, played a leading role in last year’s reform of the Common Agricultural Policy during the Irish Presidency of the Council of the European Union.

Traditionally, the cabinet comprised seven advisers, but a 5 per cent staffing cut means most commissioners are likely to have six cabinet members, plus support staff in the next commission. They can employ up to three cabinet members from their own country.

It is understood discussions are ongoing, but a decision on the make-up of the rest of the team is unlikely to be made before the European Parliamentary hearings later this month.

It is also possible that cabinet members from Maire Geoghegan-Quinn’s cabinet will work with the incoming commissioner.

Members of the cabinet are paid according to the European Commission’s pay grades, with the position of chef de cabinet typically commanding between €170,000 and €200,000 per year.

He began his career working for former IFA president and MEP TJ Maher at the European Parliament, before moving to the European Commission.