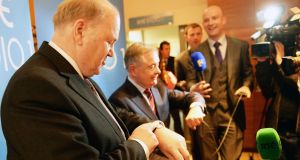 The increased social welfare Christmas bonus will not cover the cost of “a decent pair of shoes and a coat”, a pensioner told Minister for Finance Michael Noonan and Minister for Public Expenditure Brendan Howlin yesterday.

During the annual post-budget phone-in on RTÉ Radio, hosted by Seán O’Rourke, Patricia Callan said the €3 a week increase in the old-age pension was a very small return after suffering years of austerity.

“As regards to your Christmas bonus, if you go into town and you buy a decent pair of shoes and a coat you’ll have to add to it, so you’re not giving us a hell of a lot,” she said.

The Christmas bonus is being reinstated to 75 per cent of the pre-abolition rate for all social welfare recipients.

Mr Howlin said he knew the amounts involved were modest but pointed out that the first social welfare increase had gone to pensioners.

“Of course we’d like to do more and as the country recovers we will do more.”

Susan Murphy, a solicitor from Wexford, asked the Ministers if beneficiaries other than children had been considered. She said people who did not have children often wanted to leave their homes to siblings or nieces and nephews. In such instances, the beneficiaries continued to face large tax bills.

“I see this as the start of a process . . . a lot of the things that Brendan [Howlin] and I did yesterday should be seen as a first step. And if we’re fortunate enough to be re-elected, well we have set out the direction that we are going,” Mr Noonan said. “And the direction would include the kind of people you talk about now, an uncle passing property to a favourite nephew.”

Oonagh Monaghan complained about the extension of free GP care to under-12s without means testing. “If people can afford it they shouldn’t be getting it for free,” she said.