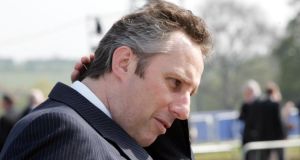 Ian Paisley jnr believes “very strongly in the traditional interpretation of what marriage is” and stands over the “immoral, offensive and obnoxious” comment. Photograph: Eric Luke/The Irish Times

Ian Paisley jnr, as he works to consolidate his hold on the North Antrim constituency, says Justin McAleese needs to “get over it” after the former president’s son revealed last week he delayed coming out as a gay man because of comments by the DUP politician.

McAleese said this happened after the MP described same-sex unions as “immoral, offensive and obnoxious”.

While urging a Yes vote in the marriage equality referendum on May 22nd, McAleese (30) explained he had been on the verge of coming out during his time as a UCD student but comments the DUP man made when a then Ulster Unionist Party adviser, Steven King, married his partner in Canada had delayed the decision by 18 months.

“Ian Paisley jnr said at the time – in reference to the gay former secretary of state to the North – ‘at least Peter Mandelson did not promote his relationship to this degree that he would go away and get married or create a civil partnership in it . . . The catch-all is that I find this sort of relationship both immoral, offensive and obnoxious’,” McAleese wrote in the Irish Independent.

“And the sad thing was that other people went along with it and didn’t challenge that view. So I stayed in the closet for another 18 months. Language matters, words matter, marriage matters.”

Paisley jnr (48) told The Irish Times: “I think he needs to get over it. 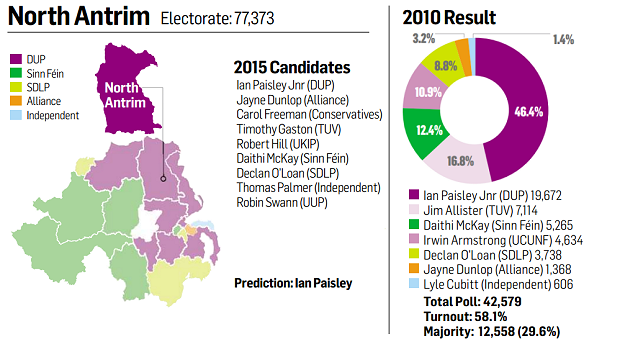 Paisley jnr is busy canvassing for votes in the North Antrim constituency he has represented for the last 10 years after securing the Westminster seat his late father, former First Minister Ian Paisley, had held since 1970.

The incumbent says the DUP’s opposition to civil marriage rights being extended to same-sex couples in Northern Ireland has never stopped him helping constituents from the LGBT community in North Antrim and gay unionists “should vote for the Democratic Unionist Party” on May 7th.

“I don’t think the gender issue is the sole important issue of a person’s identity,” he said.

“They can, you can, have differences of opinion with us on these issues but on the issues that really motivate people politically, which is usually about the economy and about the social welfare within society, about how we spend the resources, I don’t think those issues should distract a person who is gay or lesbian or straight but they should deal with them on the same level.”

Paisley jnr believes “very strongly in the traditional interpretation of what marriage is” and stands over the “immoral, offensive and obnoxious” comment.

“I have never retracted or been asked to retract,” he said.

In 2010, the DUP took 46.4 per cent of the vote in North Antrim, seeing off a challenge from Traditional Unionist Voice (TUV) leader Jim Allister.

Paisley jnr said: “If he thought he could win the seat he would be in the race. I think Jim Allister is the one person hoping his candidate does less well than him because it might affect his standing next year for an Assembly seat.”

Sinn Féin’s Daithí McKay and Declan O’Loan of the SDLP will again vie for the nationalist vote in the constituency which takes in towns such as Ballymena, Ballymoney and Ballycastle and villages including Broughshane and Bushmills, plus Rathlin Island, the North’s only inhabited offshore island.

Paisley jnr is keen to counter the loss of nearly 900 jobs going at Ballymena’s JTI cigarette factory by 2017 and says he will work to strengthen the economy in the constituency where big employers include Michelin, Moy Park and Wrightbus.

The latter scored a lucrative deal with Transport for London that led to Paisley jnr being made a Freeman of London last month in recognition of the trade links he has established between the city and North Antrim.

While it is regarded as a safe seat, Paisley jnr says he keeps in mind tips his late father gave him about canvassing. “Number one is you respect the people,” he said.

“I mean, people have told me Paddy Power won’t take a bet on me because it is in the bag. Well, I am probably the least complacent of any candidate as in I make sure I knock as many doors as I can personally, I speak to my electorate and I ask them to vote for me. I go to them on a positive agenda. I show them my record and I ask them to vote for more of the same and I think that does pay off.”