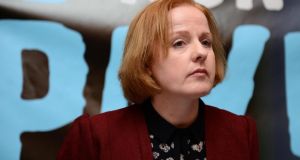 Ruth Coppinger TD: said it was “absolutely ludicrous” to suggest there was a consensus in the House against privatisation of water services. Photograph: Eric Luke/The Irish Times.

Controversial water charges legislation that has convulsed the State for more than a year, has been passed in the Dáil by 81 votes to 58. The Water Services Bill, which gives effect to the changes announced by the Government on the charging regime and the operation of Irish Water, now goes to the Seanad, having been guillotined after more than 40 hours of debate.

Ruth Coppinger (Socialist Party) claimed during the debate there were TDs in the Dáil who would “privatise their own mother” and it was “absolutely ludicrous” to suggest there was a consensus in the House against privatisation of water services.

Ms Coppinger was speaking during the report stage debate of the Bill as Minister for the Environment Alan Kelly introduced an amendment to ensure that on the issue of privatisation, “no legislation can be brought forward by any government without the support of the people and a plebiscite”.

Mr Kelly said the amendment made it very clear that any proposal to initiate legislation to allow for “the alienation of shares in Irish Water to any person other than the Minister”, required both Houses of the Oireachtas to approve such a proposal and also required a plebiscite and the support of the majority for such a poll.

Ms Coppinger however said a plebiscite had never been conducted in Ireland before and the Government was “bounced into this”. She said the Government claimed nobody wanted to privatise water services, but such an idea was “absolutely ridiculous. There are neo-liberal hawks in this parliament who would privatise their own mothers and privatise anything that moves.”

Ms Coppinger added that there were “loads of TDs that I could list off who would like to see the water service privatised as they supported every other privatisation”.

Earlier Government backbencher Michael McNamara questioned why the Minister wanted to increase the board’s membership to 10 from eight. He said Bord Gáis “achieved much with a board of six people” and asked if provisions would be introduced to ensure no conflict of interest or perceived conflict of interest.

He also warned that the Bill last year establishing Irish Water” clearly made it very easy to privatise Irish Water, far easier than other pieces of State infrastructure”. Shareholders could privatise it unencumbered by referendums or plebiscites.

He pointed to the privatisation of Aer Lingus and the loss of the Heathrow airport slots. Shareholdings were to be maintained which protected the State’s interests and to be used to ensure nothing like the loss of the Heathrow Airport slots could occur. However, it did occur, he said. “Every member of the Government hid behind the Attorney General’s advice and I foresee it happening again.”

Mr McNamara said if the Minister wanted to make it more difficult for a future Government to privatise Irish Water, “I suggest Ervia’s shareholding be transferred at a given time”.

Earlier Fianna Fáil leader Micheál Martin said the net revenue for Irish Water would be €25 million and he claimed the Government’s figures did not stack up. “€539 million has been ploughed into the ground for meters that will never be read and €180 million has been spent on establishing Irish Water in the first instance,” he said.

But Taoiseach Enda Kenny insisted “this matter has been assessed independently by the Commission for Energy Regulation and its assessments have been published for all to read”.