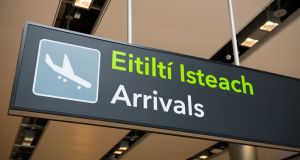 Aviation was one of Brexit’s “devils of the detail” which had been missed by the United Kingdom, the Seanad heard.

Aviation was one of Brexit’s “devils of the detail” which had been missed by the United Kingdom, according to Dublin Airport Authority’s outgoing chief executive officer Kevin Toland.

He told the Seanad Brexit created particular challenges for Irish aviation. Ireland was the EU country most dependent on UK passenger traffic.

“We’re in freefall in tourism from the UK. It’s falling like a stone,” he said.

Meanwhile, Ireland’s most important competitor for tourists was the UK.

He said Brexit was negative on the whole, but some opportunities existed including the probable reintroduction of duty free in the UK.

At the end of the two-year EU exit process, duty free sales should commence immediately for air and sea travellers to and from the UK, regardless of any transitional arrangements.

Mr Toland said aviation was in a “dangerous place”. The impact of Brexit in Britain would probably mean fewer routes and higher prices in place six months before departure from the EU.

“This has been missed by the UK...one of the devils of the detail is aviation.”

Aidan Flynn, general manager, Freight Transport Association of Ireland said his organisation was calling for the appointment of a dedicated Brexit minister.

Ireland would be at a disadvantage without such a minister, he said.

Mr Flynn said there had been “very little engagement” with the current Minister for Transport Shane Ross.

He said Ireland’s geography means the freight and logistics sector were critical to prosperity.

No country was as dependent on the UK as Ireland, both as a trade partner and for access to the wider European market. “We remain hopeful. It is wise to plan for the worst but hope for the best.”

He noted it was reported at the end of last month that 200,000 fidget spinners had been confiscated in a fortnight.

The Competition and Consumer Protection Commission (CCPC) became concerned some of the popular toys for sale in Ireland did not meet minimum EU product safety standards.

“That could become a more common occurrence given the UK won’t have to meet the same standards,” Mr Flynn said.

He said there should be no hard border and no barrier to trade with the UK. “Bringing back borders of the past would create unnecessary delays and disturb supply chains,” he said.