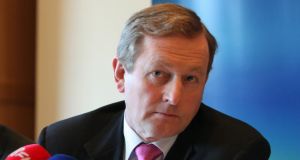 Taoiseach Enda Kenny: “nobody should be above law, and . . . we cannot have one law for one and a different one for somebody else.” Photograph: Gareth Chaney/Collins.

The Boston College tapes are a part of and a background to the problem with the North’s past and its legacy, Taoiseach Enda Kenny has told the Dáil.

He said he agreed with Fianna Fáil leader Micheál Martin that “there seems to be a sort of campaign that these are not valid, authentic or real contributions”.

Mr Kenny said: “Somebody who knows something about this said to me that some of the contributors were either dependent on alcohol or requiring of substance use all the time. I suppose the old saying in vino veritas is still valid.”

The Taoiseach said he agreed with President Michael D Higgins who said “nobody should be above law and that we cannot have one law for one and a different one for somebody else”.

‘Disturbing trend’
He was responding during Taoiseach’s questions on the peace process and related issues including the college tapes of interviews linked to the death of Jean McConville 42 years ago.

Mr Martin said “a disturbing trend is emerging whereby those with anything to do with the Boston College project are being labelled as touts, and as greedy and reckless”.

He warned against the hate campaign in which he said those responsible for conceiving the project and doing the interviews “are being targeted in language that is very dangerous”. It was “very sinister and almost sets people up for attack”. The hate campaign was being developed “by foot soldiers within the Sinn Féin movement, as far as I can ascertain, to target people”.

Prosecution not envisaged
He said that, whether people liked it or not, “I believe the people involved in the Boston College project saw it as an historical project.”

“They did not envisage the British prosecuting authorities seeking release of the tapes, Boston College being acquiescent, to say the very least, in opposing that until it was forced into a position where now certain tapes relating to the prosecution of that case have been released.”

But Sinn Féin leader Gerry Adams rounded on the Fianna Fáil leader and the “sleeveen” language and “weasel words” he used.

Mr Adams said Irish republicans had acknowledged many times the hurt caused during the war. He said he would welcome it if Mr Martin said “this is Sinn Féin”, but he said the Fianna Fáil leader “uses sleveen, sleekit, weasel words such as ‘it appears to be Sinn Féin’”.