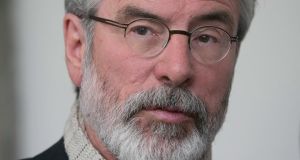 Some strange bedfellows are snuggling up under the political covers in Leinster House these days.

When they awoke in the Dáil chamber yesterday afternoon, they didn’t much like what they saw lying next to them.

Joe Higgins and Gerry Adams opened their eyes and found Enda Kenny gazing back at them. All three looked slightly astonished, but they knew there was nothing they could do about the situation.

Where the subject of Seanad abolition is concerned, they have made their beds and will have to lie in them until October.

Micheál Martin, meanwhile, seemed to think he had a comfy double all to himself. Then he turned over, only to find Peter Mathews sighing heavily beside him.

You could see that Micheál really wanted to gather up his things and go. But he couldn’t.

It was all a little awkward.

Our deepest apologies for planting these unsavoury images in your mind, but imagine how the aforementioned five – thrown together with people whose views they wouldn’t ordinarily tolerate – must feel.

Yes! Yes! cried the two in the bed beside him, but looking distinctly queasy.

No! said Michael, looking aghast at Peter, who was wearing a pained expression. Although he’s been looking that way ever since he was expelled from the Fine Gael parliamentary party over the abortion vote.

“I wish to place on record my view that this could be a very great and grave mistake” declared Deputy Mathews.

The discussion on the future of the Seanad, which went on for some time during Questions to the Taoiseach was notable for Enda’s willingness to engage on the issue.

Bone of contention
Up until now, he hasn’t exactly been putting himself about with vigour on the referendum question. This is a bone of contention for the Fianna Fáil leader, who has spent the last few weeks trying to entice Enda into the open so they can have a public debate.

For his part, the Taoiseach has maintained the line that they can get stuck into each other in the Dáil. Micheál Martin has countered, not unreasonably, with the argument that the restrictive house rules don’t allow time or latitude for a real discussion.

However, Enda appeared happy to go toe to toe with him yesterday, not in the least put out when Micheál attacked him on Fine Gael’s assertion that doing away with the Seanad will result in a € 20 million saving for the exchequer.

As they traded figures – gross and net, Martin accused him of peddling untruths. “It’s a con job,” he declared. “You’re adopting tactics that would make Libertas or Youth Defence blush” he thundered, switching from last week’s reference to Charlie Haughey and Mussolini. “I don’t believe any former taoiseach would continue to uphold a blatant untruth like this.”

With his record of looking the other way when Bertie Ahern was playing fast and loose with the facts at the Mahon tribunal, it was perhaps unwise of the current FF leader to bring up the subject of ex-taoisigh and their commitment to the truth.

Socialist Joe Higgins, unusually on the same referendum side as Enda, said that cost wasn’t “a key plank” in the case for abolition. Rather, it was the democratic rights of every citizen, not just the few privileged to have a Seanad vote. Then he rounded on the Taoiseach and the Fianna Fáil leader for doing absolutely nothing about Seanad reform for the last few decades.

Gerry Adams pledged Sinn Féin’s support for a Yes vote. Then he rounded on the Taoiseach and the FF leader for ignoring Seanad reform for the last few decades.

Peter Mathews was troubled. He declared himself for the No camp.“I am of the view that the Seanad has done a very good job in the time I have been here,” he said.

Micheál protested that this support had been conditional. Read the manifesto, page 30, he urged. It’s on the web – and it provides a weak defence for the Fianna Fáil leader.

And then they threw his party’s use of Seanad seats to reward loyal servants and unbridled bestowal of junior ministries and paying committee positions on the troops.

When it comes to the Upper House, the main protagonists on both sides don’t emerge with much honour.

But they’ll remain uncomfortable bedfellows for the foreseeable future. When it’s over, the saintly Joe Higgins, who has always called for the Seanad to be dismantled, will be the only one to emerge with his virtue intact.