Recommendation that multi-seat system should stay will stymie political reform

Opinion: Constituency work will continue to take precedence over scrutiny of legislation 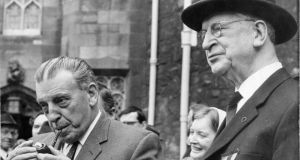 The Constitutional Convention poured some cold water on the clamour for political reform during the week with its report suggesting that our system of multi-seat proportional representation should not be changed.

The convention proposed some tweaking of the system to allow for bigger constituencies, but the overall conclusion was that the system has served us well and should be retained.

The Irish electoral system, with its intense competition at constituency level between all of the TDs, whether they are from the same or different parties, is undoubtedly one of the primary reasons for our highly clientilist form of politics.

The convention is probably in tune with public opinion in wanting to retain a system that gives voters a unique level of access to their public representatives.

However, the logic of the position is that under our current system most TDs don’t have the time or the energy to devote themselves to being full-time legislators.

The electorate can’t have it both ways: if TDs have to continue their present level of constituency work to retain their seats they cannot be the kind of full-time legislators that so many political pundits would like them to be.

Ultimately the people are sovereign, and politicians only survive if they are able to muster sufficient support. It is difficult to see any significant change in the way politics works as long as the current multi-seat electoral system remains.

A change in the system to single-seat PR combined with a list system on the German model has often been advocated as a way of providing a different mix of Deputies. However, this model was rejected by the convention.

There is no doubt that a switch to the German system would involve a shift in power from voters to the party establishments, who would draw up the lists. The convention report seems to have killed any slight prospect there might have been of changing the system.

As well as being forced to do constituency work, much of it pointless, the current system also pushes TDs into taking a populist line on every issue. One politician remarked recently on how, over more than 20 years in the Dáil and Seanad, he had made thousands of representations on behalf of individuals and lobby groups.

He had participated in numerous delegations meeting ministers and making submissions on behalf of worthy voluntary organisations and business interests. Every single representation he made involved demands for more State spending. Never once had the ability of the State to meet the demand been considered.

Even more to the point, the worthiness of the representations had never been questioned by the TD himself or any of his Dáil colleagues who participated in delegations. “In my experience everybody, the voters and the TDs, regards the State as a bottomless pit, with the government of the day and the relevant minister dismissed as mean and uncaring if they did not cough up.”

One of the reasons why the Irish economy has crashed twice in recent decades is the pressure on the system, fuelled by the media, to give in to every group demanding money and resources from the State without regard to the consequences that will inevitably follow in higher tax or borrowing.

Competing demands
The core problem is that our political system is not equipped to make a rational choice between competing demands for spending, with resources allocated to where they are most needed.

Despite everything that has happened there is still an assumption in many quarters that the State is a bottomless pit, there to be plundered by the strongest or most persuasive of lobby groups.

It’s more than 100 years since James Joyce described Ireland as “the old sow that eats her farrow”. Fine Gael TD John Kelly turned the phrase on its head to describe Ireland in the 1980s, saying the country was like the old sow being devoured by her piglets.

When he was minister for finance the late Brian Lenihan came to the conclusion that at least part of the problem was the way that the major political parties had developed.

Despite the fact that Fianna Fáil actually dominated the politics of the State for 80 years, at some fundamental level it always regarded itself as “a slightly constitutional” party.

This partly explains the fatal attraction of the party membership for Charles Haughey, who played on their visceral loyalty to the nation. It also explains the loyalty to the party which seemed to override all other considerations during his tenure. The buccaneering attitude of Bertie Ahern and Charlie McCreevy to the State’s finances in the early years of this century may also have had something to do with this attitude.

Strong loyalty
By contrast, Fine Gael, the party that traces its roots back to the founders of the State, has always expressed a strong loyalty to its institutions but has never managed to excite the same level of enthusiasm from its own members as Fianna Fáil did, and until 2011 was never able to muster the same level of support.

The hard lesson of the crash is that the country requires political leaders who have the ability and the resolve to resist narrow vested interests and promote policies that foster the long-term common good. That is never going to be easy as the temptation facing politicians is always to give in to small but powerful pressure groups who can often harness media support for their sectoral interests.

Only when the troika departs will we find out for sure if lessons truly have been learned.

1 DUP pleads with UK to reduce salary threshold for migrant workers coming to North
2 A Russian cruiser with ‘cannibal rats’: What other ‘ghost ships’ could be out there?
3 ‘If all the immigrants go back, who will work in the meat factories and do the crap jobs?’
4 Jewish council dismayed at Sinn Féin TD’s ‘unacceptable’ tweets
5 Miriam Lord: Photo-ops give way for occasional talks
Real news has value SUBSCRIBE