Independent Alliance TD Kevin ‘Boxer’ Moran has made his maiden speech in the Dáil seven months after the first sitting of the new Oireachtas. Video: Oireachtas 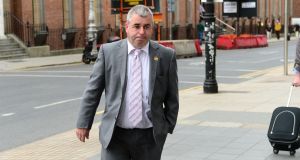 It was close to the witching hour on Tuesday night and Leinster House was quiet as a morgue.

A handful of unlucky conscripts were completing their midnight tour of duty in the chamber – talking to themselves about the budget.

Marie O’Halloran, The Irish Times Parliamentary Correspondent, was still at her post. She sent an important dispatch well after the newspaper had gone to bed.

And what startling news.

After months in the making, Kevin “Boxer” Moran finally delivered his maiden speech to the 32nd Dáil.

Having broken his duck, it is now only a matter of time before the floodgates open for the Independent Alliance TD, who is an authority on inundations.

If parts of the midlands – and many other areas of the country – are spared the worst effects of flooding this winter, the tireless Boxer is in line for much of the credit.

This maiden speech will come as a relief to his constituents in Longford-Westmeath, who must have been wondering when their elected representative was going to get around to thanking them in the Dáil for putting him there. Boxer sincerely obliged on Tuesday and also took the opportunity to congratulate the Taoiseach on his re-election to the top job.

Just in case it hasn’t hit Enda yet.

“I wish him every success in Government,” said Boxer, all set to rotate into that Government in the second half of next year under an agreement with his Independent colleague Seán Canney. Canney is Minister of State at the OPW, with responsibility for floods and fixing up things – and Boxer can’t wait to wade in when his time comes.

“The Independent Alliance is proud to have made a significant contribution to the shaping of this budget with our Government partners. While much more needs to be achieved, it is our first budget and our first step along the road to recovery,” he declared.

Boxer’s groundbreaking address elicited an emotional response from the skeleton crew of TDs rostered on the late shift. Clearly moved, Fianna Fáil’s Timmy Dooley was observed valiantly stifling a yawn to ward away the tears.

However, while this may have been Moran’s first formal speech, it was not his first time to speak in the House. The record shows four searing interventions in Dáil debates since he took his seat.

October 18th, second stage of the Wildlife Bill: “I fell up it.”

October 12th, budget debate: “He is working hard. He is a new Minister.”

September 27th, topical issue debate on the subject of motor insurance regulation: “We all have our mojo, so.”

September 27th and another topical issue debate, this time on funding for flood relief schemes: “Go on, Mattie.”

We will explain in reverse order.

Canney gives him good news and John Paul is so delighted he quotes a line from Kilkenny’s county song The Rose of Mooncoin, which mentions the banks of the Suir.

“It comes through Tipperary too,” says Mattie McGrath.

The motor insurance intervention also involves McGrath, who is very worked up about the rising cost of premiums. “We know that every young person, every pensioner and every family car owner is being screwed backwards by insurance companies,” he thunders in the course of a lively contribution. “We all have our mojo so,” declares Boxer, for no apparent reason other than Enda Kenny found his the day before.

Whereupon Mattie bridles: “I always had my mojo; I never lost it!”

On the day after the budget, Opposition deputies make very hurtful remarks about Shane Ross.

“Many in this House are wondering what the Minister for Transport is doing in his portfolio. There has been absolute silence for the past few months,” sneers Micheál Martin.

And so to the Wildlife Bill on Tuesday evening, just hours before the midnight blossoming of Boxer, when Fianna Fáil’s Éamon Ó Cuív is waxing lyrical about bogs and corncrakes, Inis Turbot island and the Tourmakeady Mountains.

“In my part of the country, the water flows downhill. We haven’t yet found a trick to get it to flow uphill, although there was a road in County Louth I was shown one time where a car rolled up the road. You might know about that,” he says to Canney.

Boxer (the two men are inseparable) jumps in immediately: “I fell up it.”