Irish Water to invest heavily in infrastructure over coming years 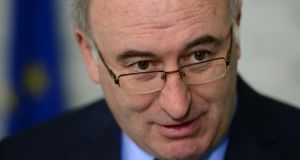 Irish Water will seek to borrow tens of millions of euro against its water and waste-water treatments plants as the new organisation prepares to invest heavily in water infrastructure over coming years.

Minister for the Environment Phil Hogan said the semi-State firm, which aims to have 1,050,000 households metered by the end of 2016, will offer three large regional contracts “in the middle of July”.

Speaking on the fringes of a forum on water services in Dublin yesterday, the Minister said metered water charges would provide the utility company with an income stream from which to repay borrowings.

The State will invest some €328 million in water infrastructure this year, but Irish Water has already identified an annual need for about €600million a year over the next decade.

Water leaks
While up to 10 per cent of water customers are estimated to have significant water leaks on their land – the fixing of which is legally their responsibility – Mr Hogan has previously said the first round of rehabilitative works on private property will be borne by the State. Just what funding mechanism would provide for this was still being considered, a department spokesman said yesterday.

The water forum heard that, unless significant underinvestment in water services throughout most of the last century was addressed, water services could be a significant constraint on planning and development, and even the food production targets in the Government’s agriculture plan, Harvest 2020.

Forum chairman and Environment Editor at The Irish Times Frank McDonald said many people felt there was “an element of irony” in that just at the point where water charges were being brought in, responsibility for water services was being “taken away” from local authorities.

However, Gerry Galvin, a principal adviser with the Department of Environment, said the move would keep the capital investment and borrowing required off the books of local authorities.

More demanding
Gerry Grant, head of asset management at Irish Water, said the organisation hoped to “change how people think and act in relation to water”.

While people would be paying for water, they would be much more demanding and had “every right to be informed and updated”. It was central to the new entity’s investment plans to create a customer base that “will pay their bills on time”.