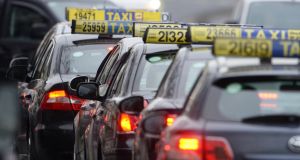 Taxi drivers in central Dublin on Monday were very surprised to hear their numbers were down throughout the State.

The apparent abundance of taxis in the capital conceals a decline of more than 40 per cent in recent years.

James Maguire, an executive member of the Irish Taxi Drivers’ Federation, said the high cost of car insurance was contributing to the decline. “It could be as high as €15,000 for some drivers,’’ he said.

Another reason, he said, was the improvement in the economy, with some drivers returning to work in the construction industry.

He said the National Transport Authority’s review of its “knowledge test’’ and other requirements for taxi drivers should feature a knowledge of Dublin city and its history, neat dress and a clean car.

Sitting in his taxi on Cathal Brugha Street, Frank Brown had reservations about a dress code. “I used to work with companies and you had to use their uniform, which made it more expensive,’’ he said.

Brown started in the business 24 years ago. “You got a decent wage then,’’ he added. He said he had no objection to people coming into the business providing they were legitimate. “I have seen four or five drivers using the same car and you would not have four or five insurances,’’ he added.

He felt the taxi regulator should be more active in the city centre. “I have never seen the regulator around here in my 24 years,’’ he added.

In Cathedral Street, Dominic Glynn wondered how rigorous the current qualifying test was compared with when he started 15 years ago. “There are too many drivers,’’ he said. “Personally, I don’t mind foreign nationals coming into the game, if they have an adequate knowledge of Dublin and pass the test in the same way as I did.’’

He said some new taxi drivers did not know “half of Dublin’’, adding being a taxi driver required knowledge of the city, manners and respect for customers.

He said those speaking out ran the risk of being called racist. “I’m not a racist,’’ he added. “I have a mixed race baby . . . my partner is from South Africa. ’’

Asked if there were racist taxi drivers, he replied: “Like all walks of life there would be.’’

On Eden Quay, Noel Kerin spoke of how difficult it was to make a living these days, with insurance costs and too many taxis.

He said no licences should be issued to those not prepared to use them. “If they do use them, they will be working 16 and 17-hour days to make a living,’’ he added.

He said there were too many part-time taxi drivers. “There was a time you would not get a licence if you were in full-time employment, but some genius took that away,’’ he added. “There are an awful lot of teachers working in this business.’’