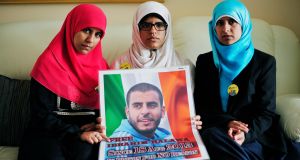 Omaima Fatima and Somaia Halawa sisters of Ibrahim Halawa who is in prison in Egypt, at their home in Dublin in 2014. File photograph: Aidan Crawley

The Green Party is seeking support from all parties and groups in the Dáil to join a cross-party motion calling for the urgent release of Ibrahim Halawa following the 14th postponement of his trial.

Green Party leader Eamon Ryan said it was time for the Government to be brave and to take “radical, strong action internationally” and raising it at European level.

He said the Government’s approach to seeking Mr Halawa’s release, three years after his arrest in Cairo, was not working.

Even three days after the delay in the trial there was no new initiative and “we have still been doing trade deals with Egypt as if there were no problem”.

He said that at some point “it will be asked why the Government is not exerting sufficient political pressure, including in respect of trade and other matters with the Egyptian state”.

Egypt “is treating us with contempt in the way it is dealing with an Irish citizen”.

Mr Ryan said it was important the message be sent that “every citizen of this country, no matter his or her creed, is treated in the same way and that we stand up for the rights of our people when they are caught in circumstances in which their rights are clearly being abused”.

Mr Ryan told the Dáil: “I suggest we start to raise this at a higher level, at European level. This is the sort of issue that we should be putting press on Egypt about, not only as Irish citizens but also as European citizens.”

He said “we have held back due to due process but there is no due process”, the Dublin Bay South TD said. He added that the Minister for Foreign Affairs Charlie Flanagan needed to raise the issue “at a much higher level than it has been raised to date”.

Minister for Education Richard Bruton said the Government had been extremely active on the issue and considerable effort was being made and “it is disappointing to see the court case adjourned again”.

He said the Government supported Mr Halawa’s own legal team in 2015 when it sought an application for release under presidential decree 140.

Mr Ryan suggested the Department of Foreign Affairs should bring in the legal team for Peter Greste, the Australian journalist “who was successfully extricated from similar circumstances”.

The Minister said the Government closely examined other cases to determine if there were lessons to be drawn from them but “they were found to be different in their approach”.

Mr Bruton said he believed the Mr Flanagan and his team would consider suggestions for further initiatives. Mr Halawa and his three sisters were arrested when they took shelter in a Cairo mosque during anti-government protests in August 2013.

Mr Halawa’s sisters were subsequently released. He is one of 494 people in a mass trial that has been adjourned 14 times over three years.

Sinn Féin deputy leader Mary Lou McDonald said it was time for the Taoiseach to intervene in the case “and make direct contact with the head of the Egyptian state to set out categorically that we will not longer tolerate the lack of due process and justice and the absolute abuse of an Irish citizen, a young Dublin man”.

But Mr Bruton said that “regardless of all the difficulties and frustrations we have the reality is the Government cannot directly interfere with a trial in another country”.

Labour Party leader Brendan Howlin said he hoped “we can have a collective initiative on this in the next week or so because what we have been doing today to date is not working”.

The motion calls for the Government to urgently seek Mr Halawa’s release under Rule 140 (presidential decree by the Egyptian president).

It calls for the foreign affairs committee to call the Egyptian ambassador to Ireland, Soha Gendi, to appear before it to explain the unacceptable delays in the justice system.

And it states that a parliamentary delegation made up of members of the Dáil and Seanad should visit the Egyptian parliament to discuss ongoing issues.