Garda Commissioner must step down, say Daly and Wallace 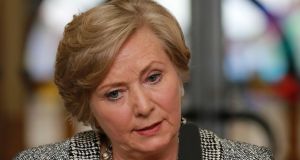 An Tánaiste and Minister for Justice and Equality Frances Fitzgerald: “I believe our focus now should be on taking all the steps necessary in ensuring this does not happen again and that we have a policing service that serves all of the citizens of this country to the highest standard.” Photograph: Nick Bradshaw

Independents 4 Change TDs Clare Daly and Mick Wallace have said it is time for Garda Commissioner Nóirín O’Sullivan “to go”. But Minister for Justice Frances Fitzgerald has insisted she has every confidence in the Garda Commissioner to implement policing reforms recommended in the O’Higgins inquiry report.

Raising the issue on the adjournment of the Dáil with the Minister, Ms Daly said, “I think it’s obvious it’s time for this commissioner to go, and unless you act, she’s going to take you with her.”

They were speaking on the controversy about claims that legal counsel for the Commissioner had alleged malice in the motivation of Garda whistleblower Sgt Maurice McCabe in the inquiry into Garda malpractice in the Cavan-Monaghan region.

Ms Daly said: “The issue is that the Garda Commissioner’s legal team, allegedly on her instruction, attempted to deliberately mislead the commission by entering false information in order to challenge the motivation and credibility of Sgt Maurice McCabe. “The fact that legal counsel have come out and said the idea to challenge his integrity was their idea and not the Commissioner’s doesn’t make it any different.”

She said it was “reminiscent of former minister [Alan] Shatter throwing Oliver Connolly under the bus”.

Ms Daly said the commission was also told two gardaí would give direct evidence Sgt McCabe was present at a meeting and said he operated under malice. “It was only when irrefutable evidence was presented showing that was false, that allegation was withdrawn,” Ms Daly said.

“There is now an immediate crisis of trust and confidence in the Garda Commissioner. Public statements of her supporting whistleblowers have been contradicted by her actions behind the scenes,” Ms Daly said.

But the Minister said, “I believe our focus now should be on taking all the steps necessary in ensuring this does not happen again and that we have a policing service that serves all of the citizens of this country to the highest standard.”

She told the TDs she had had preliminary discussions with the Garda Commissioner “about taking forward the recommendations about policing contained in the report and I have every confidence in her commitment to take this forward”.

Jim Gavin awarded the Freedom of the City of Dublin