Funding for Narrow Water bridge may be lost 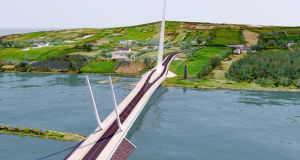 The proposed Narrow Water Bridge project, which advocates say could regenerate the economy of the north Louth / south Down Border region is in danger of failing because of opposition from Northern Ireland finance minister Sammy Wilson, it has been claimed.

Politicians and business interests from both sides of the Border this morning heard 80 percent of the funding for the bridge has been approved, but the project may lose vital EU funding because of delays at the Northern Department of Finance.

The proposed cable-stayed bridge, with a 200 metre span marks a historic crossing point at Carlingford Lough, and since partition, between Northern Ireland and the South.

The project was crucial to the prospects for economic regeneration and reconciliation of the cross Border community, the Oireachtas Committee on the implementation of the Goof Friday Agreement was told.

Presentations on the impact of the proposed bridge from Jim Boylan president of Warrenpoint Chamber of Commerce, and Paddy Malone of Dundalk Chamber highlighted the economic impact of the scheme . Mr Boylan said the bridge was “about putting food on the table, about putting oil in the tank, about jobs”. It was he said “a people’s project” which “ticked all the boxes”. Some 80 per cent of the funding was in place and planning permission had been granted. It was, he said “shovel ready”.

SDLP leader Margaret Ritchie MP said urgent pressure would have to be brought to bear on the Northern Ireland executive to “unblock” the project. She said there was just a short time for this if EU funds earmarked for the €20million project were not to be returned.

Sean Crow TD said the bridge had the potential to become the “symbol of reconciliation, the symbol of peace”. But he said while the project “ticks all the boxes” as a North South project “it may not tick the box of Sammy Wilson”.

He said there was a “dead hand” in relation to the project on the part of Mr Wilson’s department. Whether “a gentle nudge or a kick in the arse” was needed “Sammy needs to wake up and see this project needs to go ahead” , he said. Mr Crowe was warned by chairman Joe McHugh that the committee was not in private session.

Senator Mary White said she hoped Mr Wilson would “consider his rigid position in the spirit of community relations”, particularly she said as “we know time is running out”.

The proposed location for the bridge is the scene of one of the bloodiest attacks during the Troubles, in August 1979, in which the IRA killed 18 British soldiers and seriously injured six more. The bridge scheme would link Down and Louth just outside Warrenpoint to the north and Omeath to the south. The strikingly designed structure can also open to allow boats to access the Newry Canal and the Albert Basin in the city.