Opinion: Example of Queensland shows what can happen after an electoral landslide 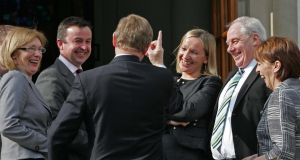 Happier times: Taoiseach Enda Kenny at a photocall with Lucinda Creighton and other newly appointed ministers of state in March 2011. Following expulsions from the Fine Gael parliamentary party there has been a reordering of Dáil committee membership. Photograph: Eric Luke

Unicameralism is a different form of government, not a cheaper form of government. Unfortunately, the debate on abolishing the Seanad has been defined by cost: Richard Bruton claims the Seanad costs €20 million a year; Michael McDowell counters that the true figure is a mere €1.60 per citizen. But the bean counters miss the point. Unicameral systems need to be designed to ensure effective scrutiny of government and clever design never comes cheap.

Queensland and Sweden demonstrate that great care is needed when abolishing a second chamber.

In 1860, in northeastern Australia, the first parliament of the colony of Queensland came into existence. It had an elected legislative assembly and an appointed legislative council. In 1922, the state abolished the council.

Queensland’s population is roughly equivalent to Ireland’s – estimated at 4.6 million – and its recent experience presents a cautionary tale for would-be Seanad abolitionists. In March 2012 the Liberal National Party won 78 of the 89 seats available in the Queensland state election. This meant the opposition had insufficient seats to adequately staff parliamentary committees.

No opposition voice
Even with members of the opposition sitting on multiple committees, there are simply not enough of them to provide an effective counter-voice to the government. The LNP has pushed through unpopular austerity measures, but the parliament is ineffective. Key checks on government power are missing: a real opposition, an effective committee system and an upper house.

Admittedly, the scale of the LNP victory is unimaginable in Ireland. The single transferable vote combined with multi-seat constituencies mean one party cannot hope to secure 87 per cent of Dáil seats. But a coalition might secure a sizable portion.

At the last election the Fine Gael/Labour Coalition won over 100 of the 166 available seats. Big government majorities are possible in Ireland. And who would bet against a grand coalition of Fine Gael and Fianna Fáil governing in the “national interest”?

Even Denis Naughten (who had previously lost the Fine Gael whip) found himself dismissed from the health committee – executive control extends beyond the narrow confines of the party.

The Government points out that other jurisdictions have abolished their second chambers without crisis. That is true; but if you were designing a unicameral constitution – one with suitable checks and balances – you would not simply expunge the Seanad. Done properly, the shift to unicameralism requires a complete rebalancing of the political system.

Checks and balances
If Ireland did opt to abolish the Seanad it should not follow the example of Queensland. Sweden elected its first unicameral parliament in 1970. But every aspect of the Swedish system has been moulded to account for the lack of an upper house.

For a start Sweden has a powerful parliamentary ombudsman and a system of auditors charged with scrutinising government actions.

It also has an influential Lagradet, or council on legislation, made up for current and former justices of the Supreme Court who can provide a non-binding view on the validity of proposed legislation. This is somewhat similar to the Irish Supreme Court’s powers under the article 26 referral procedure. However, in Ireland legislation is referred after it has been passed but before it becomes law. The Lagradet is influential in the lawmaking process.

Sweden has two safeguards against the problems of large majorities. Firstly, the electoral system is a model of proportionality. Secondly, the Riksdag is very large: 349 members for a population of 8 million. In the unlikely event of the Queensland result being replicated in Sweden there would be over 40 parliamentarians, an ombudsman, auditors and the Lagradet holding the executive to account.

Here, the trend is to reduce the size of the Dáil. A smaller parliament and no Upper House is not a good recipe for executive accountability.