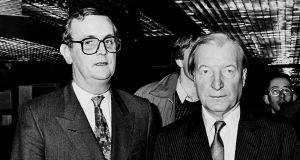 PJ Mara and Charles Haughey: Mara’s star was inextricably linked to the fortunes of the former taoiseach – political and otherwise. Photograph: Maxwell’s

Wall-to-wall tributes to PJ at the moment. In the main, they are affectionate, warm and nostalgic. After all, it’s PJ Mara we’re talking about here.

The clubby reminiscences will infuriate an awful lot of people this weekend. What’s with all this “we” stuff?

To a certain generation of journalists, politicians and political insiders, PJ Mara was a welcome figure in the small world where power, information, opinion and ego collide.

There were very few who didn’t relish his charming and disarming company.

I was always happy to see him. He was very bold, with a bold face and a sure promise of divilment in his smile. He rarely disappointed.

But to the majority who didn’t know him, the rose-tinted stories have to be unsettling.

The relationship between this quintessential government/ establishment man and much of the media must come across as a little too cosy and well connected for comfort.

Then again, PJ was a one-off – a spindoctor/PR man almost universally liked by the people he was contracted to persuade. Did this stop them regarding his paymasters with a critical eye?

There was no shortage of negative coverage of Charlie Haughey, Bertie Ahern and Fianna Fáil. If this irritated the loyal Mara, he rarely showed it in public.

Although some, like journalist Peter Murtagh, experienced his darker side.

Where other government press secretaries might appear to think their job is to take personal umbrage on behalf of their taoiseach, PJ gave the impression he found the whole political thing a bit of a lark, conveying the concerns of his fretful clients with an air of bemusement.

It was like he was, or wanted to be in cahoots with the sceptics he was briefing.

Which, of course, was never the case.

Mara was just doing his job and doing it very well. What his boss didn’t know, wouldn’t upset him.

So he’d drop juicy nuggets of gossip about life in Government Buildings (getting intelligence back in return), drawing people into his confidence while casting his imperfect political charges in a more benign light.

“Because I’m very good,” he declared.

But what exactly had he been “very good at”?

The tribunal lawyer declared himself stumped. His inquiry team hadn’t unearthed a single document in Esat relating to Mara’s work. What type of services had PJ been able to provide and get paid for?

Instead of launching into corporate mumbo jumbo, the witness advanced a simple reply.

He said that, unlike other lobbyists (or public affairs advisers, as O’Brien would later clarify), he had been “around the block a number of times”.

No further explanation needed. Everyone knew what PJ meant and why his consultancy services were in such demand.

Mara’s star was inextricably linked to the fortunes of Charlie Haughey – political and otherwise.

It’s said that Haughey saw him as a mere functionary, even though it was the skilful PJ who did much to temper Haughey’s media image while also working ruthlessly behind the scenes to cement his boss’s grip on power.

While he never held elected office, PJ was to become one of the most influential figures in Irish politics over four decades.

Yet he never appeared stressed or in a hurry. He wafted about the place in pinstripes, ciggie dangling from a languid hand, irresistibly indiscreet about politicians, journalists and an ever-changing cast of the rich and famous. He exactly knew what and how much to say, and to whom.

In 1991, while accompanying the taoiseach to a black-tie event at the Rose of Tralee, Mara pitched up in the festival press office with copies of Haughey’s speech.

A few gin-and-tonics later and he had rearranged the chairs into two opposing lines. “Have you ever tried sittin’ down Irish dancing?”

Suddenly, we were doing The Walls of Limerick, belting out the steps on the floor, moving forward and back in our seats, joining hands in the centre for a pretend spin and loudly lilting the music.

When the politicians fell spectacularly from grace, PJ’s well earned reputation didn’t plummet with them. He survived and went on to thrive in the corporate world.

He guided Ahern and Fianna Fáil to three successive terms in government. After that, his advice was sought from political parties overseas.

During the years in power, he had made his contacts. His winning personality and ability to communicate and persuade at the highest level was in no doubt. Years with Haughey meant he was well able for precious big beasts of business.

Financier Dermot Desmond was a great friend. They both did the tribunals.

In one instance, questions arose over an alleged agreement Mara struck with the people who set up Century Radio and how Desmond tried to intercede on his pal’s behalf. It also transpired that Desmond had given Mara a substantial loan.

PJ would later tell how Dermot Desmond “saved my life” when he found himself in dire financial circumstances.

“It was purely northside chaps helping each other,” said Desmond.

When Haughey resigned, the transition from politics to business appeared easy for Mara, although he kept his hand in with Fianna Fáil to great effect.

He was a staple at big social events.

He was a guest at Michael O’Leary’s wedding. At Tony Ryan’s 70th birthday bash in Kildare in 2006, he flew in from New York on Denis O’Brien’s jet. Tony O’Reilly was a friend.

They drank in the Horseshoe Bar and ate in the Unicorn Restaurant: Eamon Dunphy, Noel Pearson, Sam Smyth and various others. They were great company to fall into.

PJ Mara spent a long time observing Irish society and, through the achingly aspirant Charlie Haughey, the way it worked.

He told journalist Olivia O’Leary: “It’s all about class, baby.”

And of all of his contemporaries, he was the one who figured it out.

He will be missed by many, many friends.

PJ is to be buried tomorrow in Kinvara with his late wife, Breda. There is a requiem Mass at 4pm today in Haddington Road.

Probably to be followed by a requiem session in the pub next door. Mara was always good at the old timing.