Minister says he is ‘frustrated’ over issue of Traveller ethnicity 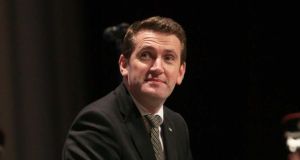 Minister of State at the Department of Justice Aodhán Ó Ríordáin has admitted he met resistance within Cabinet on the issue of Traveller ethnicity.

Mr Ó Ríordáin insisted ethnic recognition for the Traveller community was the way forward but confirmed many of his Government colleagues did not share his view.

In an interview with The Irish Times, the Minister of State said: “I have been a little bit frustrated with the lack of progress.

“It is remarkable how in Ireland the most fair-minded reasonable people can really forget themselves when it comes to the issue of Travellers, how their sense of reason and proportion goes out the window.

“People who you felt were quite liberal, fair-minded and who want a just society – as soon as the issue of Travellers comes into play they lose that sense of proportion.

“On the issue of ethnic recognition there are hearts and minds to be won over and not from a point of prejudice.

“There are very decent people in Government and around the Cabinet table who want to further the rights of Travellers and just are not convinced this is the right way to do it. I am convinced but I have more convincing to do.”

The State has argued, at various points, that ethnicity was not proven and granting recognition would prove too costly.

The Government recently rejected a private members Bill from Sinn Féin calling for Travellers to be recognised as a distinct ethnic group.

Mr Ó Ríordáin was not present for the vote but had made a passionate plea for the Travelling community to receive the recognition it requested.

He said it did not come from a place of prejudice but rather concern about whether it would drive a “wedge between them and the rest of society”.

The Labour TD also questioned whether the country had progressed in its view of Travellers.

Mr Ó Ríordáin said: “We have to admit to ourselves collectively as we face into 2016 that we have gone backwards in certain respects on the equality sphere in Ireland.

“The relationship between settled and Traveller people maybe 100 years ago was an awful lot better than it is now and we have a lot of work to do.

“But if we formally acknowledge that Travellers are a group and a people then it is part of the jigsaw.

“We could then talk about responsibility, feuding, alcohol issues and drug issues and all the other issues that marginalised groups face.”

A report by the Oireachtas Justice Committee in 2014 recommended that the Taoiseach, Enda Kenny make a statement in the Dáil confirming that the State recognised the ethnicity of the Traveller community.

Mr Kenny made no such statement to the Dáil.