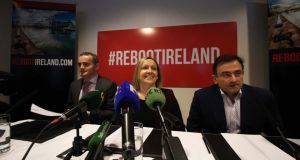 Former Fine Gael minister Lucinda Creighton hopes her new political party will raise €1 million in small donations before the next general election as she prepares to embark on a national promotional tour.

In an interview with The Irish Times following her announcement that a new political movement would be launched “within eight weeks”, Ms Creighton also revealed her view of same-sex marriage has changed from one of reservation to support.

Ms Creighton said she was hoping for “small donations from all over the country” and pointed to a pledge button on its website ahead of the party’s registration with the Standards in Public Office (Sipo) commission.

“We will need to raise a substantial sum of money. What that precisely will be, it’ll certainly have to be close to a million euro over the next year in the run-up to the general election.”

She said the election would be run “on an absolute shoestring” as the party will not be entitled to State funding available to established parties. Donations above €600 must be disclosed. The maximum an individual candidate can receive is €1,000 while a party can get €2,500.

’ “I will also do a national tour. I will definitely be visiting towns and villages all over the country communicating directly to people what we’re about, what we stand for,” Ms Creighton said.

Turning to the upcoming same-sex marriage referendum, Ms Creighton confirmed she would be in favour of a Yes vote. “I think it is hugely important for gay people. Maybe I didn’t appreciate that before,” she said.

She said her view had changed recently “because so many people I know have actually gotten married, gay couples, or intend to, of course your personal contact and your personal experience will always inform your decisions”. However, she said she would not campaign in the referendum.

Earlier, Ms Creighton told a press conference her new party, as yet unnamed, would have candidates running in every constituency at the next general election. She was joined by financial commentator and adviser Eddie Hobbs at the announcement in Dublin. He said he might consider becoming a candidate, but was focused on developing policy and strategy.

Ms Creighton said the new party would be “hugely ambitious, bold and brave” and had the potential to win “many, many seats”.

In a separate interview with The Irish Times – before the latest announcement by Ms Creighton – Minister for Health Leo Varadkar predicted the fragmentation of Irish politics. Mr Varadkar said the coming years would see “flash-in-the-pan new parties” doing well in one election.

Ms Creighton said 100 volunteers, including actuaries, barristers and people working in the community sector, were already working for the party and appealed to others to get involved. She stressed members would be free to adopt their own positions on social issues – such as the marriage equality referendum, but the whip is expected to apply on other issues.

Independent Offaly-based councillor John Leahy, who was also at the event in Dublin, will be joining the party. Mr Leahy, who was elected to Offaly County Council in 2009, said he wanted to tackle the demise of rural Ireland.