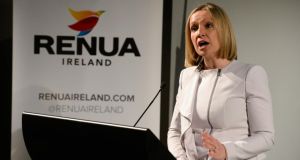 Renua Ireland is the name of the new political party which has been launched on Friday, its leader Lucinda Creighton has disclosed.

The name is the Irish for ‘new era’ but is also a play on the English word renewal.

The businessman and charity head Jonathan Irwin was also present and is a declared candidate and is likely to be a candidate as is Co Offaly councillor John Leahy.

Ms Creighton and Mr Hobbs were the first two speakers. She said she wanted the party to be open minded and open to all,

“We began a movement in January which has been gaining traction and support every since.”

She said that the party would unveil 16 policy proposals but said it was not a fait accompli and policy formation would be a dynamic process.

She said that minutes of cabinet meeting would be published within 48 hours of those meeting taking place.

“We intend to govern in the sunshine. We should trust Irish citizens with the truth..

“We think that enticing new blood, new thinking and new decision-making at the highest possible level should be [ENCOURAGED],” she said.

Ms Creighton also said that the party would apply time limits to Ministerial terms, to prevent what she described as “stagnation and group think.”

The party will be organised into seven regional branches and has said is has had advanced discussions with 180 people so far identified as being potential candidates for the party.

Mr Hobbs said that there had been a global change where power had been dispersed from the centre to individuals. He said it was happening not just in government but also in corporate life.

He said Ireland had put up with cronyism and back-room deals and insiders and secrecy for too long.

He said Renua Ireland would be the first open party in the State.

Mr Hobbs said that in 20 years time kids would see that today was the day when politics had cut its anchor with the rotten politics of the past.

The membership of the party will ultimately decide on all candidates through an online poll system.

An hour before the party launch, Ms Creighton and its legal adviser Lisa Chambers, lodged the party’s formal registration papers and constitution with the clerk of the Dáil.

Renua Ireland will be positioned to the right of centre, with policies that it describes as pro-enterprise, pro-business and geared towards entrepreneurship. However, it has also asserted that its social policies will compassionate, with an emphasis on supporting the most vulnerable in society.

The party has said it has an ambitious reform agenda and is in favour of free and whipless votes on matters of conscience. It is also setting out comprehensive policies to effect radical reform of the public service.

The childcare expert Shane Dunphy is also a declared candidate and the financial commentator Karl Deeter is the party’s ethics officer.