Brendan Howlin says large levies are being considered by the Cabinet

Conor Pope reports from Golden Island, a small rural community near Athlone which has been isolated by the floods and is struggling to survive in appalling conditions. Video: Bryan O'Brien 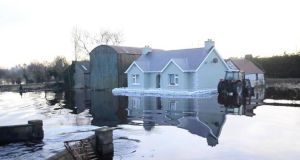 The Government is examining levies on insurance policies as part of its response to the flooding crisis.

Minister for Public Expenditure and Reform Brendan Howlin said large levies are being considered by the Cabinet.

Asked if levies and relocation programmes were being examined, the Minister said: “We may be doing both of those things, I said when I did the capital plan last October that flooding and climate change would be a very big priority and we have allocated half a billion euro for that.

“We have asked the OPW to look at 300 potential flood areas and then look at the solutions to those and I told the OPW, give me the quantum of money that we can actually spend in the next six years and I will allocate it and that is exactly what I did.

“In truth you have 30,000 individual households that might not be covered by these schemes, if we spend €35 million as we intend to start this year on protecting for example a town like Enniscorthy, we can’t spend €35 million on every individual household, I mean very bad planning decisions were made in the past where people were allowed to build on flood planes and so on.

“And there is a relocation proposal being looked at and we may have to go that route as well. There is no country that can guarantee that every single area that did not flood in the past will not flood in the new reality of climate change.”

The Taoiseach and several Cabinet Ministers are meeting the insurance companies on Tuesday.

Enda Kenny said they would have to explain the contradictions between their claims that they are insuring properties and customers’ declarations otherwise.

Mr Kenny said: “We need to have a very frank discussion with the insurance companies who make very sizeable profits from Ireland about what this situation is and how it can be addressed.”

Saying he did not expect immediate solutions from them, Mr Kenny continued: “I hope we can do that in a clear fashion or at least commence it on Tuesday, or explain what the nature of the problem is.”