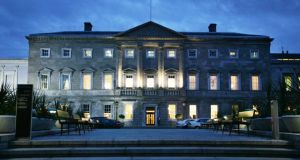 The computer usage of TDs, Senators and political party staff is not logged in the same way as Leinster House staff, instead they are subject to an ‘acceptable usage policy’. Photograph: Alan Betson/The Irish Times

The Leinster House authorities have banned internal access to gambling websites and put a “soft block” on social and professional networking sites.

An Oireachtas spokesman confirmed that websites featuring pornography and nudity had also been blocked, following a query from The Irish Times about which sites were restricted.

“The system blocks all attempts at banned websites and soft blocks - allowing the user to proceed if they so choose - attempts to access material which may or may not be appropriate,” he said.

Staff carrying out research on legislation relating to horse racing and gambling regulation were provided with temporary access to blocked gambling sites.

A category of websites described as “Blogs/Wiki” is subject to the “soft block” system, along with social and professional networking sites.

Users can proceed to view such sites, but are made aware that their action is being logged.

Sites that can be used to download software to anonymise the user’s presence online are also barred under the category “risk, fraud and crime”.

The restrictions apply to Leinster House staff, journalists, visitors and contractors. The policy was devised by the Oireachtas’ human resources unit.

The computer usage of TDs, Senators and political party staff is not logged in the same way. They are subject to an “acceptable usage policy” which instructs them not to visit sites that contain “obscene, pornographic, sexist, racist or other objectionable material”.

Members are also told not to use the internet for “commercial gain or profit” and are advised not to send anything sensitive or confidential by email. Playing computer games is also frowned upon.

In March, the Dublin West TD Patrick Nulty announced his resignation from the Dáil after admitting to sending inappropriate social media messages to constituents, including a 17-year-old.