Richie Larkin, who was in court today on a breached court order charge, talks to us about his opinions on the state of Irish Water. 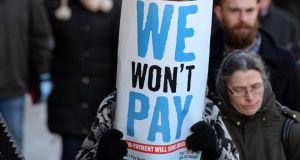 A rally in support of the jailed protesters will be held in Dublin today, Friday, and is expected to draw thousands of people. Photograph: Eric Luke/The Irish Times

The jailing of five water protesters for defying a court order has been portrayed as a “political act” by a leading figure in the anti-water charges movement.

Socialist Party TD Paul Murphy contended the decision was similar to the “political policing” behind his own high-profile arrest last week.

The High Court on Thursday imposed a sentence of 28 days for contempt of a Court order on: Bernie Hughes, of McKelvey Avenue, Finglas; Michael Batty of Edenmore Avenue, Raheny; and Derek Byrne of Streamville Road, Donaghmede.

Damien O’Neill of Greenwood Park in Coolock and Paul Moore Mount Olive Grove in Kilbarrack were given a sentence of 56 days.

All were found to have defied orders not to go within 20m of locations where water meters were being installed.

There was deeply divided reaction to the decision.

There was no response from either of the Coalition parties. In stark contrast, left-wing parties and anti-water charge groups reacted with anger and outrage. The Socialist Party, People Before Profit, the Workers Party, Right 2 Water, Sinn Féin councillors, and other groups all condemning the decision.

Asked was the decision political in nature, Mr Murphy claimed the judiciary’s decisions reflected the outlook of the “establishment”.

The decision sparked a spontaneous protest from supporters of the five.

A crowd estimated at 300 was involved in a march along Dublin’s northern quays and later from O’Connell Street to Mountjoy Prison.

Mr Murphy said it would galvanise the anti-water charge protest.

“The indication is there is still mass opposition. The arrests in the last two weeks and the jailing will give a shot in the arm to the movement in terms of mobilising people.”

Mr Byrne is the protester who branded Michael D Higgins a “parasite midget” during a demonstration in Finglas in January.

In other recordings of protests Mr Byrne has posted online, he has also directed verbal abuse at gardaí deployed to protect installation work.