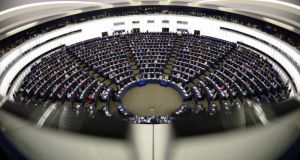 The low representation at plenary sessions in the second half of last year reflects the low attendance of two of Ireland’s 11 MEPs, Brian Crowley and Luke Ming Flanagan in the first six months of the Parliament. Photograph: EPA

The attendance rate of Irish MEPs at the European Parliament’s plenary sessions dropped to 76 per cent in the second half of last year, one of the lowest in the EU, according to research from European Movement Ireland.

In its 2014 accountability report, to be published today, the organisation also found that the number of speeches given by Irish MEPs at the parliament dropped considerably between 2010 and 2014. Irish MEPs delivered 560 speeches last year, compared with 686 in 2010 and 944 in 2011.

The number of written questions submitted by Irish MEPs, and reports and opinions authored by Ireland’s representatives at the parliament all fell between 2010 and 2014.

The research by European Movement Ireland, an independent group working to develop the connection between Ireland and Europe, does not break down the individual performance of MEPs.

Ireland’s low representation at plenary sessions in the second half of last year reflects in part the low attendance of two of Ireland’s 11 MEPs, Brian Crowley and Luke “Ming” Flanagan in the first six months of the new European Parliament.

Irish MEPs had a 91 per cent rate in the first half of 2014 – the final months of the previous European Parliament before last May’s European elections.

Noelle O’ Connell, executive director of European Movement Ireland, said the fact that the number of reports and opinions authored by Irish MEPs fell towards 2014 was understandable, given that 2014 was an election year.

She said early figures for 2015 indicated a pick-up in activity and engagement by MEPs.

Nonetheless, Ms O’Connell stressed that the presentation of opinions and reports was one of the best indicators of an MEP’s engagement at the parliament. She said all Irish MEPs should aim to produce at least one opinion or report within the first two years of an election.

“We feel that reports and opinions are the key indicators, the legislative engine of the parliamentary process,” she said.

Ireland holds 11 out of 751 seats in the parliament. Fine Gael holds four, Sinn Féin and Independents holding the remainder.

The report also focused on participation by the Taoiseach and Ministers in meetings of the European Council, the EU institution that represents member states, which is seen as a key indicator of engagement.

It found that between 2010 and 2014, both Taoiseach Enda Kenny and his predecessor, Brian Cowen, had a 100 per cent attendance rate at EU summits.

In terms of the attendance of individual ministers at their respective council meetings, which take place periodically during the year in Brussels and Luxembourg, Ireland had an overall average attendance of 84.6 per cent. This puts it at 19th place out of 28 member states in terms of ministerial representation at these meetings.

Ms O’ Connell said the attendance rate of Mr Kenny and Mr Cowen was “hugely encouraging”, but that Ireland should be aiming for a higher rate of attendance at council meetings.

The report also looks at the attendance of Ministers at pre-council Oireachtas meetings, where they brief TDs from their committees on the forthcoming EU meeting. The figures show that ministerial attendance has gradually increased from 36 per cent in 2010 to 51 per cent in 2014.

Ms O’Connell said important decisions affecting Irish people were made at the council meetings, so it was vital that legislative and policy briefings were communicated back to TDs.