Ireland urged to make its voice heard in Brexit debate 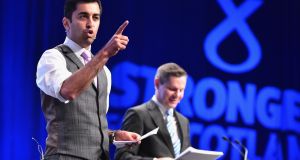 Ireland is the only foreign state whose voice should be heard in the referendum on the United Kingdom’s future in the European Union, a Scottish minister has said.

Humza Yousaf, Scotland’s Minister for Europe, said his advice to those across Europe who wanted the UK to remain in the EU was “to say nothing at all”. Ireland was the one exception to that rule, he said. “The Irish are seen as close friends, indeed our cousins. Any support they give will be viewed positively, [as given] in a way that is genuine and sincere.”

The Government has made it clear that it regards the UK’s continued membership as being in the interests of Ireland and Britain. That public stance drew criticism last month from the DUP MP Ian Paisley jnr, who said Taoiseach Enda Kenny’s intervention was counterproductive. “What part of ‘keep out’ does he not understand?,” Mr Paisley asked.

Speaking in Dundalk on Thursday, however, Mr Yousaf said Irish voters could play a decisive role in the Brexit referendum, which is expected to take place in June. “All the polls suggest this is on a knife-edge. You have 465,000 Irish citizens living in the UK. That could possibly swing it,” he said at a conference on Brexit organised by the Centre for Cross-Border Studies.

Mr Yousaf, a member of the Scottish National Party, suggested that if the UK voted to leave the union but a majority of Scottish voters were in favour of staying in, being “dragged out of the EU against our will” could lead to another Scottish independence referendum. Scotland’s first minister Nicola Sturgeon has said a second independence vote will take place only if there is public demand. “But this could be an issue that would create material change which could facilitate some of that demand,” Mr Yousaf said.

Mary C Murphy, lecturer in politics at University College Cork, said a British vote to leave would almost immediately trigger political and economic instability. It could result in the value of sterling falling, a challenge to British prime minister David Cameron’s position and a major boost for the Eurosceptic movement. “In the most dire assessment, the future of the EU and European integration could be called into question,” she said.

Dr Murphy said a Brexit would bring significant uncertainty for Northern Ireland, which received large amounts of EU funding though the Common Agriculture Policy and structural funds. “In addition, Northern Ireland’s capacity to influence a post-Brexit political and economic landscape is limited – due to its size and political make-up,” she said.

Paul Brennan, a British Labour MEP whose north of England constituency borders Scotland, said the Northern Ireland peace process would be threatened in the event of a vote to leave. He suggested there was a place in the referendum debate for US politicians, in particular those who were involved in the peace process.

It was not only Scotland that could be dragged out of the EU against its will, Mr Brennan said. It was possible that Scotland, Wales, the northern English border region, Yorkshire and London could vote to remain in the EU but that the UK overall would have a majority in favour of leaving. “We’re looking potentially at the Balkanisation of England,” he said.