Irish Times opinion poll: President set to be re-elected at his ease 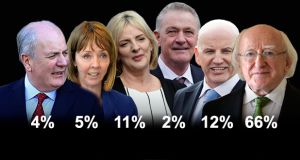 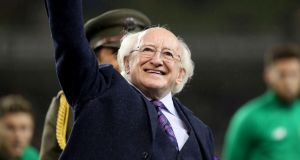 Michael D Higgins commands a huge lead over his rivals and is almost certain to be re-elected President of Ireland for another seven years when voters go to the polls next week.

With just over a week of campaigning to go, the latest Irish Times/Ipsos MRBI opinion poll finds Mr Higgins’s lead is of near-unassailable proportions, and it would take an electoral earthquake to defeat him at this stage.

Despite criticisms of Mr Higgins for failing to engage in some debates, none of Mr Higgins’s rivals have made a significant impression with voters, with only two of the five challengers to the incumbent registering support in double figures.

The support for the candidates among respondents who expressed a preference is as follows: Michael D Higgins 66 per cent; Sean Gallagher 12 per cent; Liadh Ni Riada 11 per cent; Joan Freeman 5 per cent; Gavin Duffy 4 per cent; and Peter Casey 2 per cent.

The poll was conducted on Wednesday, Thursday and Friday of last week among a representative sample of 1,200 voters aged 18 and over in face-to-face interviews at 120 sampling points in all constituencies. The margin of error is plus or minus 2.8 per cent.

If anything like the figures in today’s poll were repeated on election day, Mr Higgins would be re-elected on the first count, with no distribution of second preferences. He could lose significant support between now and polling day and still win on the first count. The poll puts Mr Higgins on twice as many votes as all his opponents combined.

Support for Mr Higgins is highest in Dublin and in Munster, where he enjoys 71 per cent of first preferences, according to the poll. He is at 60 per cent in both Munster and Connacht-Ulster. Better-off voters, farmers and voters in urban areas are most likely to support Mr Higgins, but he will win votes in large numbers across all ages, classes and geographical areas.

In the referendum on removing references to blasphemy in the Constitution, a bare majority of voters (51 per cent) favour removal, as advocated by the Government.

Just under one in five voters (19 per cent) favour the retention of the article, while a quarter (25 per cent) say that they don’t know.

This suggests that the referendum is on course to pass – though a combination of a low turnout on the day and a swing to the No side in the final weeks, which often happens in such referendums, could undermine the certainty of that outcome.

Support for the referendum proposals is highest in Dublin, among younger voters and among better-off voters.