Green Party protests at US embassy over travel ban

Members of the Green Party have protested outside the US embassy in Ballsbridge, Dublin over the executive orders signed by president Donald Trump over the last few days. Video: Ronan McGreevy 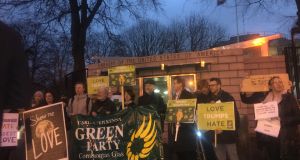 Two dozen members of the Green Party staged a silent protest outside the US embassy in Dublin. Photograph: Ronan McGreevy

Mr Ryan said British prime minister Theresa May had done “real damage” to her own reputation and that of the UK by making a visit to the White House.

He maintained that even if the Taoiseach were to make the views of the Government known on controversial issues such as the travel ban on people from certain countries, he risked being “drawn in and associated with the policies of Mr Trump.

“No matter how you try and say, ‘oh well, we’ll go and talk about our differences’, the imagery of those visits and what it will say about Ireland will be more damaging,” he said.

“I don’t think we can take the traditional approach. Those orders signed by president Trump last week are against everything we stand for. We should be willing to stand up against that. We can’t pretend things are normal. They aren’t.”

Two dozen members of the Green Party staged a silent protest outside the US embassy in Dublin on Monday evening.

The demonstration was held to protest at the order banning visitors from seven majority Muslim countries from going to the US, but also his support for torture and his gag on climate scientists speaking out.

Polish native Karolina O’Beacháin Stefanczak said she grew up behind the Iron Curtain. “It is my duty to say no when I see discrimination and new walls being built. I can’t allow people to be treated unequally as I know what the consequences are.”