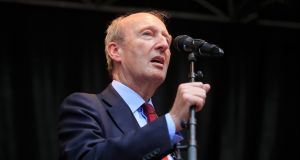 Shane Ross. Prof Cormac O’Dea says the Minister’s projected cost of €70 million might be correct if the grant only applied to those who provide more than 10 hours of childminding duties a week. Photograph: Gareth Chaney/Collins

The roll-out of the proposed “granny grant” payment to grandparents who carry out childminding duties could cost the State up to €400 million rather than the €70 million originally forecast by the Minister for Transport, a Yale professor has said.

Cormac O’Dea, an assistant professor in the department of economics at Yale University in the US, said on Friday that if all grandparents who provide an hour or more care for their grandchildren applied for the grant the cost could “easily reach €400 million”.

“That’s equivalent to a €25 per week increase in the personal rate of payments for people with disabilities and carers, or more than half a percentage point rise in the basic rate of income tax,” he told The Irish Times.

Prof O’Dea said Minister for Transport Shane Ross’s projected cost of €70 million might be correct if the grant only applied to those who provide more than 10 hours of childminding duties per week. “But if all those who currently provide at least an hour’s help per month to their grandchildren’s families applied to this scheme, the cost could easily reach €400 million,” he said.

“The proposed grandparent grant is potentially hugely expensive without any clear policy objective. If the Government wants to help support parents with childcare, far more targeted and effective alternatives exist: such as direct funding of childcare centres or subsidies for childcare costs.”

Prof O’Dea based his financial calculations on data from the Trinity College Tilda longitudinal study on ageing.

Mr Ross has defended his proposal to offer a €1,000 payment to grandparents for their childminding duties, describing the proposal as “novel” and that it would be “welcome for a large number of people”. He had said the grant would cost an estimated €70 million a year. The idea has been tabled by the Independent Alliance in preliminary budget discussion with Minister for Finance Paschal Donohoe.

The proposal has been deeply criticised by childcare advocacy groups who say the focus should be on investing in affordable, regulated and high quality childcare options for families rather than cash payments to grandparents.

The Department of Transport did not respond to a request for comment on the tweets.